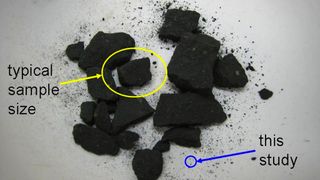 Life's building blocks were found in a much smaller sample of the so-called "Murchison meteorite" than before, as this diagram shows.
(Image: © Michael Callahan)

A study of teeny-tiny meteorite fragments revealed that two essential components of life on Earth as we know it, could have migrated to our planet on space dust.

Researchers discovered DNA components and amino acids components in a smidgen of a space rock that fell over Murchison, Victoria, in Australia in September 1969. Previous studies of the meteorite revealed organic material, but the samples examined then were much larger. This study would lend more credence to the idea that life arose from outside of our planet, researchers said in a statement.

Amino acids are the basis of proteins, which are structures that make up hair, skin and other bits of living creatures. DNA is a molecule that contains information on building and running an organism.

Meteorites such as Murchison are rare types of space rocks: the carbonaceous chondrites make up less than 5 percent of meteorites found on Earth, NASA said. Further, the molecules discovered in these space rocks are usually in miniscule concentrations of parts-per-million or parts-per-billion.

These factors have researchers questioning how significant the carbon-rich rocks themselves were in bringing life to Earth. Space dust, however, is more plentiful as it is constantly available from comets and asteroids shedding debris in their travels through the solar system.

The Murchison study (a proof of concept for further work, the researchers say) found life's building blocks in a sample that weighed about the same as a few eyebrow hairs. The 360-microgram sample was about 1,000 times smaller than a typical sample analyzed by researchers.

This micro-sample required a more sensitive technique than usual to extract the information scientists needed. A nanoflow liquid chromatography instrument organized the molecules, which were then ionized with a nanoelectrospray for analysis in a mass spectrometer.

NASA and other agencies have dealt with small sample sizes before, such as on the Stardust mission that collected particles from Comet Wild-2 and returned them to Earth in 2006. Researchers anticipate the techniques they are using today could be used for other missions in the solar system, especially for sample-return missions.

"This technology will also be extremely useful to search for amino acids and other potential chemical biosignatures in samples returned from Mars and eventually plume materials from the outer planet icy moons Enceladus and Europa," said Goddard astrobiologist Daniel Glavin, who was co-author on the research.

The study, led by Callahan, was recently published in the Journal of Chromatography A.

Editor's note: This story was updated on Feb. 18 to clarify that scientists found the building blocks of DNA and amino acids in samples of the Murchison meteorite in paragraph two.