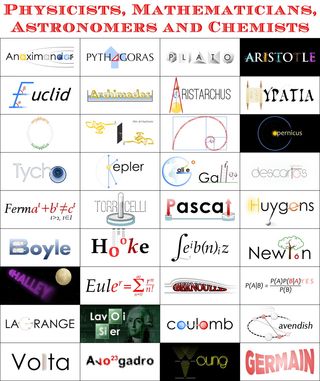 From the ancient Egyptian astronomer Hypatia to modern-day astrophysicist Stephen Hawking, physicists throughout history are getting the artist's treatment in a new set of illustrations honoring the thinkers' contributions to science.

Dr. Prateek Lala, a physician based in Canada, has recently crafted playful images using the names of famous scientists to show, in logo form, what they gave to theoretical physics. Called "science typographies" or "logotypes," some of the more striking images include Isaac Newton's apple and Edwin Hubble with the Hubble Space Telescope that eventually flew his name into space.

Lala started making his images in 2013 after speaking with a friend about the ways in which people learn, and how to get everyone interested in scientific research. After getting some inspiration from other word artists, Lala crafted logos for researchers in a wide number of scientific fields. He posted his creations on the website Visual.ly, and people responded. [See Lala's amazing illustrations honoring physicists]

"I started out with well-known scientists who I thought had made the most significant contributions to their fields, and whose surnames lent themselves well to design concepts related to their discoveries," Lala told Space.com via email. "I received some feedback and suggestions from friends and site users on Visual.ly, and slowly expanded the repertoire. The history of science and the biographies of scientists have always fascinated me. Scientific discoveries are rarely made by solo efforts, and reading about collaborations between researchers and their academic 'pedigrees' provided a lot of grist for the mill."

Hadfield's illustration substitutes the space station for the "H," puts a maple leaf in place of the "a," and features a lightning bolt on the "d," paying homage to the popular cover of David Bowie's "Space Oddity" that Hadfield recorded from orbit.

Lala's typographies attracted the attention of the Perimeter Institute for Theoretical Physics in Ontario, Canada, and the artist produced a poster for the fall 2013 issue of the institute's magazine.

"This has turned into a continuously ongoing process, and I come up with a few new images every week," Lala said. "So far, I've depicted about 110 physicists, mathematicians and chemists, and about 60 biologists and physicians. The 55 images chosen for the poster published by the Perimeter Institute were selected for their relevance to theoretical physics. I'm always happy to receive new suggestions!"

Lala's logotype project is ongoing, and if there is enough interest, he might consider using some of the images for T-shirts or coffee mugs. You can see more of his work on Visual.ly: http://visual.ly/science-typography-01