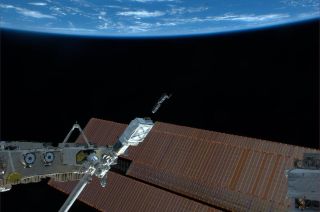 Tiny cubesats launch from deployment device on the International Space Station on Feb. 11, 2014 in this photo taken by Japanese astronaut Koichi Wakata, Expedition 38 flight engineer, on board the orbiting lab. The launch included the first four cubesats of a 28-satellite fleet for the Earth imagery company Planet Labs.
(Image: © JAXA/Koichi Wakata via @Astro_Wakata)

The four "cubesats," each about the size of a loaf of bread, were deployed from the space station this morning and began zipping freely around Earth. Twenty-four more will join them over the coming days, filling out the "Flock 1" satellite fleet operated by San Francisco-based startup Planet Labs.

"Our company goal is to image everywhere very frequently, for everyone," Planet Labs co-founder Robbie Schingler said in a statement. "If you image everywhere, then that actually means that you can image anywhere. That’s going to be quite transformative for a number of countries, for a number of companies, and so forth. Our monitoring capability is always on. We are always taking a picture."

Each of the 28 cubesats that make up Flock 1 measures just 12 inches long by 4 inches wide by 4 inches tall (30 by 10 by 10 centimeters). But the tiny spacecraft are quite capable, capturing images with a resolution of 10 to 16.5 feet (3 to 5 meters), Planet Labs officials say.

The Flock 1 satellites will fly around Earth at altitudes ranging from 240 miles and 400 miles (386 to 644 kilometers). They'll gather imagery within 52 degrees of the equator — a huge swathe that encompasses most of the planet's agricultural regions and populated land.

The constellation is designed to be flexible, as each satellite's software can be reprogrammed easily from the ground, company officials say.

"Our ability to build and operate spacecraft will allow us to do more with these spacecraft in the future as we begin to think about the satellite segment as a very remote server with a whole bunch of sensors on board that could be reprogrammed to do other things," Schingler said.

The Flock 1 spacecraft were among 33 cubesats delivered to the orbiting lab Jan. 12 on the first contracted cargo mission of private spaceflight firm Orbital Sciences' unmanned Cygnus resupply spacecraft. All 33 will be ejected into Earth orbit over the coming days and weeks.