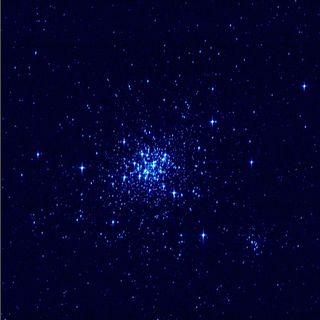 A Gaia test image of the young star cluster NGC1818 in the Large Magellanic Cloud. This image was released on Feb. 6, 2014.
(Image: © ESA/DPAC/Airbus DS)

A new European spacecraft tasked with mapping a billion stars in the night sky  has beamed its first picture back to Earth.

The European Space Agency's Gaia spacecraft aimed its gaze a dense young cluster of stars in the Large Magellanic Cloud for its first test image, which ESA officials unveiled Feb. 6. As amazing as the picture is, it only covers an area less than 1 percent of Gaia's full field of view, ESA officials added.

Gaia launched into space on Dec. 19 and it will spend five years studying the precise positions, motions and properties of 1 billion stars in the Milky Way, with the goal of creating the most accurate 3D map to date of our home galaxy. ESA officials have said the $1 billion (740 million euros) mission will help scientists better understand the history and formation of the universe. [Photos: Gaia Spacecraft to Map Milky Way Galaxy]

To carry out this daunting task, Gaia's surveying instruments must be precisely calibrated. And to help bring Gaia into its fully operational phase, the mission team members have been downloading test images from the camera, like this inaugural shot of the galaxy cluster NGC1818, which lies in the Large Magellanic Cloud, a small satellite galaxy of the Milky Way some 160,000 light-years away from Earth.

Gaia has two telescopes that can stare out at two different patches of the sky simultaneously. The light from both telescopes is fed to Gaia's camera, which is the highest-resolution image sensor ever flown in space with about 1 billion pixels.

When Gaia is fully brought to life, it will measure an average of 2 million stars per hour, which translates to about 50 gigabytes of data each day. Gaia will eventually compile more than million gigabytes of data, or the equivalent of about 200,000 fully loaded DVDs, ESA officials said.

Because Gaia has such a sweeping view of the sky, it will be able to capture all one billion of its targets during its first six months in operation. But the spacecraft will measure each of its stars an average of 70 times throughout the course of its five-year mission so that astronomers poring over the data can study the stars' distances and motions through space. Additionally, Gaia will measure physical characteristics of the stars, including their brightness, temperature and chemical makeup, according to ESA.

A Russian Soyuz-Fregat rocket carried Gaia aloft from Europe's spaceport in Kourou, French Guiana in South America. The spacecraft is parked in the sun-Earth Lagrange Point 2 (L2), a gravitationally stable point in space.