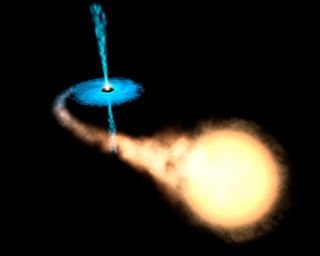 An artist's depiction of a star and its companion black hole, known as an X-ray binary system. These systems were responsible for heating the early universe in the first few hundred million years after the Big Bang.
(Image: © ESA, NASA, Felix Mirabel)

Black holes acting as companions to early stars may have taken more time to raise the temperature of the ancient universe than previously thought, a new study suggests.

Scientists found that the energy streaming from these early pairings took longer to raise the temperature of the universe, which means astronomers could detect signs of the heating process previously thought to be out of bounds. Two cosmic milestones occurred in the universe a few hundred million years after the Big Bang— dominating hydrogen gas was both heated and made transparent.

"Previously, it was thought that these two milestones are well separated in time, and thus in observational data as well," study co-author Rennan Barkana, of Tel Aviv University, told Space.com via email. [The History and Structure of the Universe (Infographic Slideshow)]

Barkana worked with lead study author Anastasia Fialkov, also of Tel Aviv University, and Eli Visbal, of Columbia University, to determine that the heating most likely overlapped the early, and perhaps middle, part of reionization, the process that allowed the events of the early universe to become visible to scientists today, making the heating potentially observable to astronomers today.

Like stars today, stars in the early universe often had companions. When one of the two companion stars exploded to create a black hole, the new system — known as an X-ray binary (XRB) — emitted energy in the X-ray spectra. Although other systems emit X-rays, XRBs are the brightest, dominating the total cosmic intensity of X-rays.

Fialkov's team used new models to recalculate the amount of time required to increase the temperature of the hydrogen spread throughout the universe. Surprisingly, the researchers said, the higher-energy X-rays took longer to raise temperatures than the less-powerful rays.

"High-energy X-rays typically travel a long distance, over a long time, before their energy is absorbed and heats the gas," Barkana said. "Eventually, all their energy is deposited, but 'eventually' is too late in the early universe, when galaxy and star formation are ramping up."

After the Big Bang, protons and neutrons joined together to form neutral hydrogen, the most basic element on the periodic table and the dominate gas in the universe. The dominance of neutral hydrogen rendered the universe opaque, in a period known as the cosmic 'Dark Ages' that existed during the first 100 million years after the Big Bang. Only after stars and galaxies began to form and release ultraviolet light did the universe begin the process of reionization, clearing the hydrogen gas and making the universe once again transparent for high-energy events.

The early stars didn't manage to clear the darkness of the early universe until nearly a billion years had passed since the Big Bang. As a result, astronomers struggle to peer through the darkness to observe the first billion years in the life of the 13.8-billion-year-old universe. However, low-energy radiation does pass through the cosmic gas and is a promising probe of those early times.

With low-energy X-rays dominating the scene, hydrogen gas in the early universe would have heated quickly as it absorbed energy. Under this model, scientists would have a difficult time observing any signs of the heating, which would have finished long before reionization was complete.

But the slowdown caused by the presence of high-energy X-rays means that the heating should overlap the spreading transparency, allowing scientists to capture glimpses of the process.

The research was published online today (Feb. 5) in the journal Nature.

Several radio telescopes have been constructed with the goal of observing the properties of the first stars and galaxies. The Low-Frequency Array in the Netherlands, the Precision Array for Probing the Epoch of Reionization in South Africa, and the Murchison Widefield Array in Western Australia all study the 21-centimeter (8.3 inches) wavelength, the frequency where hydrogen emission is emitted. Other telescopes are currently in the works, including the Square Kilometer Array (SKA), the 5,000-mile-wide (8,000 kilometers) grouping of telescopes spreading across South Africa and Australia.

According to experimental cosmologist Judd Bowman of Arizona State University, telescopes like the SKA should be able to detect signals emitted from the heating of the early universe, if the designers take the new research into account.

In a companion News and Views article published in the same issue of Nature, Bowman wrote, "The results should prompt astrophysicists to reconsider the wavelength range that the telescopes will target."

Bowman, who was not part of the recent study, studies the early universe and the 21-cm line.

Though engineers designed the current arrays under the assumption that reionization would be visible to the radio telescopes, the new discovery suggests that these instruments may also be able to detect signs of heating by early black holes once thought to be out of reach.

Editor's Note: This story was updated reflect corrections at 5:40 p.m. EST. The corrections clarified some points made by Rennan Barkana while being interviewed for this piece.