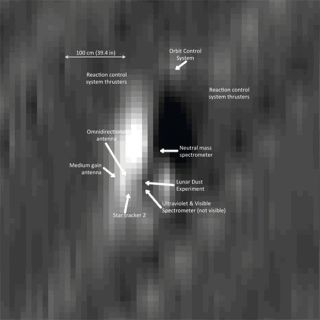 In a moment of lunar synchronicity, a moon-orbiting NASA probe spied another one of the space agency's spacecraft from its spot in orbit.

The Lunar Reconnaissance Orbiter caught sight of NASA's LADEE moon dust probe as both spacecraft sped around the moon at nearly 3,600 mph (1,600 meters per second) on Jan. 14. LRO and LADEE were a mere 5.6 miles (9 kilometers) apart as the photo was taken.

LADEE (the name is short for Lunar Atmosphere and Dust Environment Explorer) can barely be seen as a somewhat blurry smudge above the moon's pockmarked surface, however this photo was no accident. The LRO and LADEE teams worked together to be sure that the magic moment was preserved, rolling LRO 34 degrees to the west to be sure to capture LADEE at the right moment. [See more photos LADEE taken by NASA's Lunar Reconnaissance Orbiter]

"As planned at 8:11 p.m. EST on Jan. 14, 2014, LADEE entered LRO’s Narrow Angle Camera (NAC) field of view for 1.35 milliseconds and a smeared image of LADEE was snapped," NASA officials wrote in an image description.

NASA's LRO has a history of spotting other spacecraft from orbit. In December, the probe photographed China's first moon lander and rover — called Chang'e 3 and Yutu respectively — on the lunar surface, marking the first soft-landing on the moon since 1976.

LADEE took measurements before and after the Chinese touchdown to see how the landing impacted the lunar dust environment from its post in orbit.

"LADEE's science instruments gathered data on the dust and gas species before and after the landing to provide the science team with a comparison," Rick Elphic, LADEE project scientist, wrote in a mission update. "The Neutral Mass Spectrometer (NMS) was running in a mode that would allow it to monitor native lunar atmospheric species, as well as those resulting from Chang'e 3's propulsion system."

LADEE launched into space on Sept. 6, 2013 to investigate lunar mysteries from orbit around the moon. The loveseat-size spacecraft is designed to probe the thin lunar atmosphere to gather data about the moon's dusty environment. The spacecraft is also going to investigate moon dust mystery dating back to before the Apollo program.

The $504 million LRO probe launched to space in 2009 carrying seven science instruments with it. It is about the size of a Mini Cooper car and orbits about 31 miles (50 km) above the moon's surface.