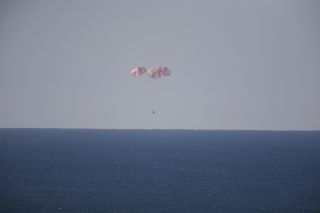 SpaceX dropped a Dragon test article over the Pacific Ocean, off the coast of Morro Bay, Calif., in December 2013 to test its parachutes.
(Image: © NASA/Kim Shiflett)

With an eye toward ferrying American astronauts to space, the commercial spaceflight company SpaceX dropped a human-rated version of its Dragon capsule into the Pacific Ocean to test out its parachutes, NASA announced.

Video of the SpaceX parachute test off the coast of Morro Bay, Calif., shows a Dragon capsule being cut loose from a helicopter flying 8,000 feet (2,438 meters) above the ocean. Two drogue parachutes and three main parachutes successfully deployed to guide the Dragon's descent, and the 12,000-lb. (5,443-kg) spacecraft was brought back to shore. NASA unveiled the video on Jan. 17.

The SpaceX drop, which took place in late December, was intended to test how Dragon's parachute system would function in case of an emergency during launch or ascent with a human crew on board. But the parachutes are also designed to be used during normal landings, alongside the Dragon's "SuperDraco thrusters" allowing the capsule to touch down softly. [The Rockets and Spaceships of SpaceX (Photos)]

"SpaceX is working diligently to make the Dragon spacecraft the safest vehicle ever flown," Gwynne Shotwell, president of SpaceX, said in a statement. "The parachute system is an integral part of Dragon's ability to provide a safe landing for nominal and abort conditions — with this successful test we are well-positioned to execute a full end-to-end test of the launch escape system later this year."

Under a $1.6 billion contract with NASA, SpaceX has started sending unmanned Dragon capsules to the International Space Station to deliver supplies and science experiments to the astronauts living on board the orbiting outpost. So far, the Hawthorne, Calif.-based company has completed two of its contracted 12 cargo runs.

But SpaceX, which was founded by entrepreneur Elon Musk, has also been working on modifications to the Dragon capsule to prepare it for carrying astronauts into space. With the success of last month's test-drop, the company is now poised to launch abort system tests. SpaceX is already manufacturing the spacecraft and rocket for those more advanced trials, according to NASA.