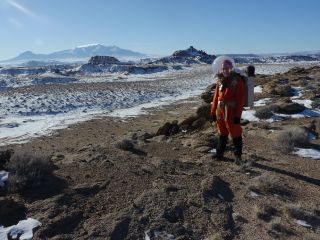 Unlike a real spacesuit, the ones used at the Mars Desert Research Station (such as this one worn by journalist Elizabeth Howell) are not pressurized.
(Image: © Matthieu Komorowski)

Editor's Note: In the Utah desert, scientists are attempting to recreate what a real-life mission to Mars might be like, and SPACE.com contributor Elizabeth Howell is along for the ride. She sends this dispatch on the spacesuits used to simulate walks on the Red Planet.

HANKSVILLE, Utah – About four miles into a canyon walk near the Mars Desert Research Station here, my shoulders started to hurt. The straps of my spacesuit backpack had been digging into the blades for the past two hours.

In other respects, though, I was very lucky on the Jan. 10 excursion. Some of my crewmembers experienced severe fogging in their helmets during past "Marswalks" in the Utah desert, but the ventilation in my helmet was keeping at least the front of my visor clear. The footing was also hard, unlike the mud other members of my Crew 133 team experienced in a late afternoon walk a few days before.

The spacesuits used by the Mars Society facility are not fully representative of real ones. The most notable difference is the suits aren't pressurized. We're required to wear jumpsuits and gloves, which cuts down on our mobility slightly, but we don't have the sensation of fighting against balloon-stiff joints that astronauts experience on space missions. [Mock Mars Mission in Pictures: Life on a Simulated Red Planet]

Once the jumpsuits are on, we strap on a pair of our own hiking boots on to our feet. (A few years ago, the Mars Society made the decision not to have shared boots due to hygiene concerns.) Mud can be a large problem at our location near Hanksville, so we also put on gaiters to keep out the worst of the dirt and dampness.

Next comes the backpack. Under the fabric cover, each backpack is essentially a large plastic tub with a 12-volt battery and a fan inside of it. The fan drives air circulation into our helmets, which is important as it can get hot when you're working outside for two to four hours, the typical length of a Marswalk. Attached to each backpack is a collar on which the helmet sits.

Each crew member soaps the front of their helmet to cut down on fogging, then a crew member latches it on to the collar. Our helmets vary depending on if they're the older style of the newer style. The newer style "fishbowl" helmet has 360-degree visibility, while the older-style ones have a black piece at the back and sides that cuts down on lines of sight. Once the sun gets high enough in the sky, a mini-greenhouse effect takes place in the helmet (old or new, my Crew 133 members say) and makes you feel hot.

If ventilation becomes a huge concern, there's enough room under the collar to push up the helmet and get some extra air in the helmet. The fans and ventilation system are not powerful enough to fully seal the helmet, which of course would be a bad idea under real Mars conditions. While wandering around Utah, however, the helmet sure feels real enough.

Elizabeth Howell is on a two-week simulation at the Mars Society's Mars Desert Research Station from Jan. 4 to 19. Have a burning question about the mission or a picture you really would like to see from the site? E-mail contact@elizabethhowell.ca for the chance to get your question answered in a future story.