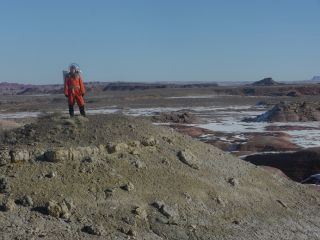 HANKSVILLE, Utah – My nose was running. Instinctively I reached up but was startled when my hand crashed against the helmet lodged on my head. I was about half an hour into my first walk in a Mars-like environment, and I knew I'd have to wait about another hour before I could grab a tissue.

The 76-minute "Marswalk" Monday (Jan. 6) took place at the Mars Desert Research Station in Utah, where I and the rest of Crew 133 are spending half of January operating as though we are on the Red Planet. The "spacesuit" I wore is not quite the real deal, but it's close.

There's a helmet, for example, and a backpack for ventilation. Instead of a pressure suit, however, I wore a jumpsuit. And under the helmet is a gap big enough for a hand, just in case I need to reach my face. [Mock Mars Mission Crew Answers Reader Questions (Video)]

A minor nose problem didn't seem reason enough to break "sim" yet, though. In front of me, commander Paula Crock was leading me across the terrain. At one point, she stopped and shouted through her bowl, "These are fossilized shells!" The shells were in fact stretching for dozens of feet in front of us. I felt like I was indeed on another planet, instead of simply pretending to be.

The mission I'm participating in — which is run by the nonprofit Mars Society — aims to figure out science experiments, engineering technology and overall procedures that would be useful on Mars one day. This includes "Marswalks" in which crew members don spacesuits and do geology and other work in the area around MDRS.

Safety is the primary consideration. At least two people go out on each spacewalk, carrying a first-aid kit. (Crock also has wilderness first-responder training.) Each person on the spacewalk carries a radio to talk to the "Hab," the habitat where we're living for two weeks. Periodic communications checks occur to make sure everybody can hear each other.

Crock and I each broke "sim" briefly twice, for safety reasons. Her helmet fogged up enough for her to want to wipe her hand across the inside for a better view. And I pushed my glasses up because a headband made them slide down my nose too far for me to see the ground and ahead at the same time. (This shows why it's so important to simulate these things before doing it for real.)

As a first-time Marswalker on a training run, my two main concerns were staying upright and making sure I was going in the right direction. Crock let me lead the navigation briefly on the way back. I walked right past our footprints from the trip over, requiring a call back to the path.

Walking wasn't a problem on straight stretches, but going up and down hills proved more difficult because the backpack made me more top-heavy. I was taught how to plant my feet on hills to get up and down more safely, which helped.

The terrain was somewhat treacherous as well. Thin layers of ice covered pools of water on our path, and I did a sort of penguin walk with small steps to get over those spots safely. The snow also masked sand traps, so we tried to walk on the dirt where possible.

In between my thoughts about safety, however, I took some time to enjoy the incredible views. Just before we turned back, Crock pointed up a nearby hill — a somewhat steep one — and encouraged me to get on top of it. Round hills stretched around me on one side, a jagged mountain on the other.