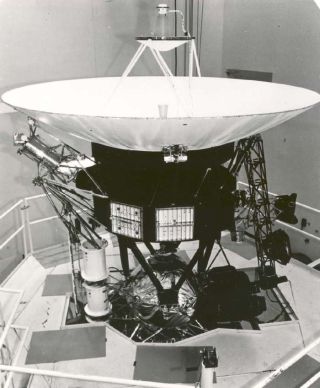 Before the Voyager spacecraft were launched in 1977, a prototype was put through vibration tests.
(Image: © NASA.)

In this historical photo from the U.S. space agency, a prototype Voyager spacecraft is shown at NASA's Jet Propulsion Laboratory in Pasadena, California, as it successfully passed vibration tests which simulated the expected launch environment.

Two Voyager spacecraft were launched in 1977 to explore the outer planets and some of their satellites. The large parabolic antenna at the top is 3.7 meters in diameter and was used at both S-band and X-band radio frequencies for communicating with Earth over the great distances from the outer planets.

The spacecraft received electrical power from three nuclear power sources (lower left). The shiny cylinder on the left side under the antenna contained a folded boom, which extended after launch to hold a magnetometer instrument thirteen meters away from the body of the spacecraft. The truss-like structure on the right side is the stowed instrument boom which supported three science instruments and a scan platform. The scan platform allowed the accurate pointing of two cameras and three other science instruments at Jupiter, Saturn, the rings of Saturn, Jupiter's moons, Saturn's moons, Uranus, moons of Uranus, and Neptune.