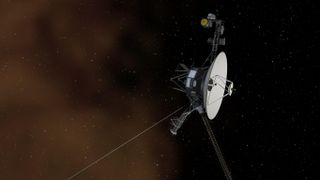 The year 2013 saw a wealth of discoveries, insights, and milestones that advanced the fields of astronomy and other space sciences. From extrasolar planets to extraterrestrial neutrinos, these finds have made sure that 2013 has been an unforgettable year.

Here's a look back at some of the most stunning space science revelations of the year:

After almost 35 years of traveling, scientists reported this year that NASA's Voyager 1 spacecraft reached interstellar space in August 2012. Because the solar system doesn't contain helpful "You Are Here" signs to mark its boundary, scientists relied on a powerful solar eruption to determine the density of the molecules in space around the craft.

With the transition into interstellar space, Voyager 1 became the first craft to leave the solar system behind, making it a significant milestone in the annals of space exploration. It is currently about 11.66 billion miles (18.76 billion km) from the sun.

Physicists in Antarctica found the first evidence of cosmic rays from outside the solar system. The energetic rays themselves are difficult to detect, so scientists rely on the discovery of neutrinos produced as the cosmic rays interact with their surroundings. Of the billions of neutrinos that pass through a square centimeter of Earth each second, only a few actually interact with matter.

But using the IceCube Neutrino Observatory, an instrument buried in a cubic kilometer of ice beneath the South Pole, physicists were able to detect two neutrino events that originated beyond the solar system, the first definitive detections since 1987 (and events a million times more powerful than their predecessor). Although the event was too small to pinpoint the origin of the cosmic rays — suspects include supernovas, gamma ray bursts, and black holes — the detection opened the door to a greater understanding of some of the powerful events in the universe.

Ancient Mars could have supported life

Only seven months after its spectacular landing on Mars, NASA's Curiosity rover discovered signs that ancient Mars could have supported life in the form of primitive microbes. The determination was made after instruments on the rover identified some of the key ingredients necessary for life in the rocks of Mars. Curiosity isn't searching for current life on Mars, only for signs of the Red Planet's potentially habitable environments in the past.

In December, the Curiosity team announced evidence of a freshwater Martian lake near the planet's equator that could have supported life for extended periods of time. The lake likely existed about 3.7 billion years ago, far more recently than scientists previously thought habitable environments existed on the Mars.

More recently, scientists have used NASA's Mars Reconnaissance Orbiter to determine that dark seasonal streaks near the equator could indicate the presence today of flowing salt water on Mars during the planet's warmer months. Previous signs of existing flowing water on the planet were limited to the poles, while the equatorial regions were considered completely dry.

Altogether, Mars is shaping up to be a far more habitable place after the discoveries of 2013.

At the end of October, scientists announced the discovery of Earth's closest exoplanet twin, in terms of size and composition. The planet, called Kepler-78b, is just 20 percent wider and 80 percent more massive than Earth, and boasts a similar density. But don't look for a twin environment on the rocky planet; it orbits its sun once every 8.5 hours, at a distance of about 900,000 miles (1.5 million km), with surface temperatures reaching more than 3,680 degrees Fahrenheit (2,000 degrees Celsius).

This discovery came shortly after the confirmed extrasolar planet count reached 1,000, a significant milestone since the first planet outside of the solar system was found 20 years ago. But the number of these planets is sure to increase. Of the almost 3,600 planetary candidates announced by NASA'sKepler spacecraft, just over 150 have been confirmed. [Related: Biggest Alien Planet Discoveries of 2013]

But astronomers aren't simply content with increasing the number of extrasolar planets; they want to know more about the alien bodies. In early October, scientists announced that they had produced the first cloud map of a planet outside the solar system. Scientists used the Kepler spacecraft and the infrared Spitzer Space Telescope to study Kepler 7-b, a Jupiter-sized planet orbiting near its sun.

The death of the comet of the century

Hailed as the "comet of the century" throughout 2013, Comet ISON passed by the sun on Nov. 28 before breaking apart. Discovered in September 2012, the orbit of the comet bore striking similarities to the Great Comet of 1680, which was visible in the daylight. From a distance, the comet's brightness suggested it had a large nucleus, which could provide an amazing show in 2013.

Skywatchers around the world tracked the comet as it came into view. [Amazing Photos of Comet ISON by Stargazers]

Comet ISON buzzed the sun on Thanksgiving Day (Nov. 28). But as the comet passed only 684,000 miles (1.1 million km) from the sun, the gravitational pull and intense heat of the star stripped the comet of its dust and gas, ultimately disintegrating it to the point where only telescopes such as Hubble were able to continue observing it.

Scientists determined that the comet's nucleus was smaller than was previously estimated, which contributed to its rapid destruction. But while the comet of the century may not have put on a great show, its long approach allowed professional and amateur astronomers alike time to prepare and capture a wealth of information, which will improve understanding of the composition and behavior of comets in the solar system.

On Feb. 15, 2013, a meteor exploded over Russia's Chelyabinsk region, detonating about 930 miles (1,500 kilometers) east of Moscow. Known as a bolide, the exploding fireball injured hundreds of people and damaged hundreds of buildings. The 56-foot (17-meter) rock generated the explosive power of more than 470 kilotons of TNT. [Photos: Meteor Streaks Over Russia, Explodes]

While most of the injuries from the unexpected explosion came from falling glass, the event focused the attention of the world on potential threats from rocky bodies in space. Because smaller asteroids such as the one that caused the Russian explosion are both numerous and challenging to detect, most research to date has focused on larger bodies that would do far more damage if they collided with Earth.