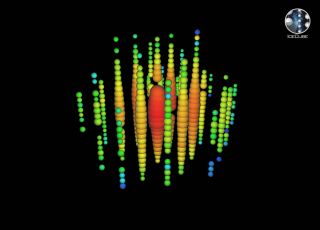 This image shows the highest energy neutrino ever observed (1.14 petaelectronvolts), which scientists named 'Ernie,' as seen by the IceCube Neutrino Observatory at the South Pole on Jan. 3, 2012. Image released Nov. 21, 2013.
(Image: © IceCube Collaboration)

For decades, scientists have been searching for ghostly neutrino particles from outer space, and now they have finally found them.

Using the IceCube Neutrino Observatory in Antarctica, researchers found the first evidence of neutrinos from outside the solar system since 1987. The findings open the door for a new era of astronomy that could reveal secrets of the strangest phenomena in the universe, scientists say.

"It is a major breakthrough," said Uli Katz, a particle physicist at University of Erlangen-Nuremberg, in Germany, who was not involved with the research. "I think it is one of the absolute major discoveries in astro-particle physics," Katz told SPACE.com. [Neutrinos from Beyond the Solar System Found (Images)]

For the past century, scientists have pondered the source of cosmic rays, which contain the energy of a rifle bullet in a single atomic nucleus. It's thought that objects such as supernovas, black holes or gamma ray bursts may produce cosmic rays, but their origin is difficult to detect. Instead, scientists look for neutrinos — subatomic particles with no charge and very little mass — produced when cosmic rays interact with their surroundings. Billions of neutrinos pass through a square centimeter of Earth every second, and only a tiny fraction of them interact with matter.

IceCube is located inside a cubic kilometer of ice beneath the South Pole. The observatory consists of 5,160 digital optical modules suspended from 86 strings, which detect the tiny flashes of blue light emitted when neutrinos interact with molecules in the ice, known as Cherenkov radiation. Most neutrinos detected on Earth originate in Earth's atmosphere or the sun.

But in April 2012, IceCube detected two neutrino events with energies above 1 petaelectronvolt (PeV), the first definitively detected neutrinos from outside the solar system since 1987, during a supernova in the Large Magellanic Cloud. The new events, which scientists nicknamed "Bert" and "Ernie" (after the Sesame Street characters), were more than 1 million times the energies of the ones observed in 1987.

Deeper analysis revealed 28 high-energy neutrinos in IceCube data taken from May 2010 to May 2012. Each event was greater than 30 teraelectronvolts (TeV). The group reported preliminary results May 15 at the IceCube Particle Astrophysics Symposium at UW–Madison, and the full results were detailed online today (Nov. 21) in the journal Science.

"We have some really compelling evidence that we have neutrinos from beyond Earth's atmosphere and beyond the solar system," said study co-author Nathan Whitehorn, a physicist at the University of Wisconsin-Madison.

The number of events is too small to pinpoint the origin of the neutrinos, however.

"We do not yet have the number of neutrinos with which could paint a picture of the sky in the 'light of neutrinos,'" said Katz, who is leading the design of a rival neutrino observatory called KM3net, to be built underneath the Mediterranean Sea.

The next step will be answering questions such as where the neutrinos come from, what their energies are and what "flavor" they are (neutrinos come in three types). As IceCube gathers more data, " All of these questions are now starting to be addressed," Katz said.