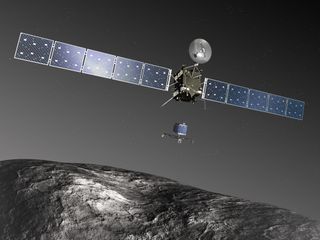 Europe's Rosetta spacecraft is due to receive a wake-up call in January, ending its hibernation in preparation for an unprecedented mission to not only put itself into orbit around a comet, but also send a lander to the comet's body.

The spacecraft, called Rosetta, is heading toward a 2.5-mile diameter comet called 67P/Churyumov-Gerasimenko, one of the so-called Jupiter Family Comets whose orbits are controlled by the largest planet in the solar system.

Comets are the pristine remains of the solar system's building blocks. Scientists are keenly interested in learning more about what they contain and how they are constructed, information that not only will help reveal details about how the solar system came into existence some 4.6 billion years ago, but also how Earth — and possibly other planets — received the ingredients for life.

Hence the mission's name — Rosetta — after the Rosetta Stone, which became a blueprint for deciphering ancient Egyptian hieroglyphs.

"Rosetta — the mission — should become a key element for our understanding of the history of the solar system," Stephan Ulamec, project manager for the spacecraft's lander, told Discovery News.

For example, he added, "it would be really interesting to find out whether the organic chemistry that is relevant for life is there on comets."

The lander, known as Philae, is outfitted with 10 science instruments to tackle a wide range of studies, including an analysis for organic molecules and experiments to test a molecule’s symmetrical construction, or chirality.

Amino acids on Earth, for example, are "left-handed" while sugars in DNA and RNA are “right-handed.”

Provided the lander makes it to 67P's surface and successfully drills and heats a sample, released gases can be scrutinized for chirality.

Landing on 67P is far from assured. For starters, engineers designed Philae not knowing what type of surface it would encounter. One of the first orders of business for the Rosetta science team will be to scrutinize pictures of the comet to find a safe landing site.

"We are most concerned that we are able to find a landing site which is friendly and nice and adequate. We have no idea what is on the surface of the comet. We do not know the topography. We do not know the density, the boulders, the crevices, the pinnacles. This lack of knowledge is the big challenge of this mission," Ulamec said.

To deal with the uncertainty, Philae's landing system was designed to work on a variety of terrains. Initially scientists suspected the comet’s body would be icy hard, but as a result of NASA's 2005 Deep Impact comet mission, they now suspect 67P may be softer and covered in dust.

Either way, once a suitable landing site is found Philae will drop to the comet’s surface and release a pair of harpoons laced with tethers to keep itself from bouncing back into space.

"The design was chosen because it was the most flexible in terms of strength," Ulamec said.

"If the surface is hard, it doesn't penetrate deep, but it anchors. If soft, it penetrates deep, but the 2.5-meter tether would still provide anchoring," he said.

At the time of landing, slated for November 2014, the comet will be about three times as far from the sun as Earth and heading inward. After about three months, heating from the sun most likely will end Philae’s mission. The Rosetta mothership, however, which will be conducting both independent and collaborative studies with the lander, is expected to remain operational at least until the end of 2015.

Rosetta, which was launched in March 2004, is due to come out of hibernation on Jan 20.