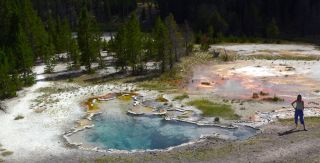 What's a virus to do when it finds itself in an inhospitable environment such as hot water? Coating itself in glass seems to not only provide protection, but may also make it easier to jump to a more favorable location to spread.

Researchers led by a group from the Center for Life in Extreme Environments at Portland State University recently coated four different virus types in silica, a glassy substance found in certain types of hot springs. Three of the four viruses studied took on a silica coating and went into hibernation, reactivating when the coating was removed.

The NASA-funded finding has implications for seeking out viruses on other planets, including Mars — a big target for life studies over the decades. No microbes have been found on the Red Planet, but NASA is currently seeking evidence of habitable environments there, particularly with the Mars rover Curiosity. [Latest Amazing Photos from Curiosity]

Water and possible oceans once coated the surface of Mars, according to data from multiple missions. Pictures from orbit appear to show evidence of gullies and shorelines. Rovers and orbiters have also found extensive evidence of sulfates, which are rocks that form in water-enriched environments. Curiosity itself found evidence of an ancient streambed, including rounded pebbles, in the first year of its mission.

Whether microbes were in the supposed Martian water is still up for debate. One problem is scientists don't even know how to look for viruses in the fossil record on Earth, said researcher Kenneth Stedman, an associate biology professor at Portland State who supervised the new virus research. One of his graduate students, James Laidler, led the work.

"I'm convinced there are viruses in the rock record, but we don't have the technology to detect them," Stedman said. "We really need to develop the technology [for virus detection] here before we can even think about going to look there [on Mars]. We're trying to do just that."

Stedman's lab is in the early stages of looking at virus "biomarkers," or naturally occurring characteristics that can give clues about virus origins. The challenge is, viruses use cells to replicate, so to find a virus biomarker one would need to figure out the difference between the two. If researchers could find the virus biomarkers in rocks, this could be a leftover of a past virus. Stedman is now working on a manuscript that examines this topic. [5 Bold Claims of Alien Life]

It's possible that viruses can become part of the rock record when they are coated in silica. First, however, the researchers are looking at how the coating mechanism works. Previous work in Stedman’s lab showed that model viruses could be silica-coated in conditions similar to hot springs. Stedman's most recent research, published online in the Journal of Virology,probed what happens to different virus types if and when they take on a silica sheen.

Team members placed each of these viruses in an environment similar to that of a hot spring, which is oftentimes acidic and features water at or close to boiling. All but the bacteriophage PRD1 developed the silica coating; "It just shrugged off the silica and said, who cares," Stedman said. "We have no idea why PRD1 is resistant to silica coating, but probably there is something special about the structure." [Extreme Life on Earth: 8 Bizarre Creatures]

Silica makes the viruses less effective at infecting because of the glass barrier surrounding them. Bacteriophage T4 was rapidly inactivated, but the SSV-K virus saw a moderate slowdown, while the smallpox virus was "incredibly" susceptible, Stedman said.

"That's not terribly surprising," he added. "The surface of the Vaccinia virus looks a lot like a bacterium in terms of having a membrane around the outside. Looking at bacterial mineralization that you find in hot springs, etc. [it's clear] why Vaccinia gets coated really well."

Is interplanetary transport of viruses possible?

With the silica effects established, the researchers next turned to transport. If a virus is coated in glass and gets launched away from the hot spring somehow — perhaps by a geyser in the boiling water — could it remove that coating and become active again? The answer is yes, particularly for bacteriophage T4.

"At least 90 percent of the activity comes back, and so basically you can coat the viruses in silica, mistreat them, and then you can uncoat them," Stedman said. "We call this the zombie experiment. We can inactivate them, and then they come back."

What's more, once the viruses are encased in silica, they are extremely resistant to desiccation, or drying. It's possible that the viruses can survive deep freezes and other harsh environments, but drying is the only environment change tested at Portland State so far.

"The reason we tested desiccation is there are some rather strange data, particularly in hot spring viruses, that seem to indicate that these hot spring viruses are getting from one hot spring to another relatively quickly on a geologic time scale," Stedman explained.

The dispersed viruses could land in a much drier environment if they were launched using a geyser, steam vent or volcanic explosion, he said. Then they could be protected by the silica coat that they acquired in the hot spring.

Previous research from volcanic springs worldwide revealed a remarkably similar genetic heritage of these viruses, he said. Dispersal by geysers, fumaroles or even volcanic explosions is only one possible explanation for having viruses that are extremely genetically similar, but there are other genetic or environmental explanations that could come into play, he added.

In tested conditions similar to those high in Earth's atmosphere — which has a temperature and pressure similar to that of the frosty Martian surface — Stedman's team found that the viruses can get their mojo back as long as they are out there for less than a month. Any longer and their activity ceases, for reasons Stedman's team is still puzzling out.

"One of the issues with any astrobiology implications is, 'Could something be transported from a meteorite, from one planet to another?' In the conditions we looked at, No. There is a loss of that activity."

While Stedman's work has interplanetary implications, the NASA-funded research also could help protect flu vaccines on Earth. These sensitive and potentially life-saving vaccines often are ruined by something as simple as a power failure in the fridge used to store them. If there were a way to stabilize them with a silica coat until they were needed, this could make vaccines much easier to store and transport, particularly in developing countries.

The research is nowhere near those applications, Stedman cautioned, but it is something he is interested in furthering if he can.  (He has filed a patent and is continuing research.)

"10 percent to 40 percent of vaccines spoil and have to be thrown away," Stedman said, adding that the Bill & Melinda Gates Foundation has poured money into transportable refrigerators to get these vital shipments into the developing world. But Stedman hears of examples in the United States, as well: "One of my colleagues, his wife is a pharmacist. Their fridge died and they had to throw out the flu vaccine."

Major funding for this research came from the NASA Astrobiology Institute Director's Discretionary Fund as well as the National Science Foundation. Stedman's results will be printed in the Journal of Virology on Dec. 15.