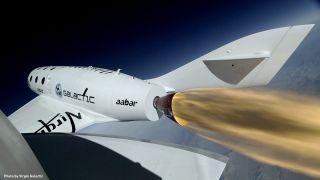 It's official: Virgin Galactic's commercial spaceflight revolution will be televised.

Virgin Galactic's owner, British billionaire Sir Richard Branson, has inked a deal with NBC ensuring that the network will air live coverage of the inaugural flight of the company's private SpaceShipTwo rocket ship, as well as other special programs in the run up to the historic first flight. Branson and NBCUniversal unveiled the deal today (Nov. 8).

Virgin Galactic and SpaceShipTwo builders Scaled Composites have been putting the spacecraft through a series of supersonic flight tests this year leading up to the first space launch. The first commercial flight is currently expected to take place in 2014 from Spaceport America in New Mexico.

"Virgin Galactic is thrilled that NBCUniversal will join us on our exciting first journey to space," Branson said in a statement today. "In this first chapter of commercial space travel, we will help make space accessible and inspire countless more people to join us in the pursuit of space exploration and science innovation."

NBC will air a primetime special the night before the flight and a three-hour live event on the "TODAY" show during the flight of the new commercial space plane, NBC representatives said.

"Without a doubt, Sir Richard and his children taking the first commercial flight into space, will go down in history as one of the most memorable events on television," said Sharon Scott, president and general manager of Peacock Productions, said in a statement.

"Through NBCUniversal’s multiple platforms and overseas network partners, viewers from around the world will get to experience this where were you moment; we’re extremely honored to chronicle Sir Richard’s journey and live launch into space," Scott added.

SpaceShipTwo will launch from an altitude of 50,000 feet (15,240 meters) into the air by its White Knight Two. After its release, the suborbital space plane's rocket engine fires for 70 seconds and then shuts down, allowing the plane to coast higher and higher. The spaceship will then reach a peak altitude of 361,000 feet (110,000 m) where the passengers will experience about five minutes of weightlessness.

About 640 would-be space tourists have bought tickets for a SpaceShipTwo rocket ride, including many celebrities.

Lady Gaga plans to fly in space on a Virgin Galactic flight, and announced this week that she will sing on the trip, too. Other stars with SpaceShipTwo tickets include actor Leonardo DiCaprio, Justin Beiber and Ashton Kutcher.