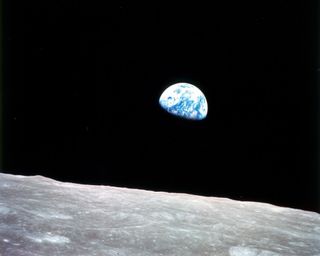 When a Mars rover leaves a trail of tracks in the Martian dunes, is it a tragic imprint of human intrusion on a pristine alien landscape billions of years old, or the first hopeful sign of intelligent life arriving on a long-dead planet? Such an extraterrestrial scenario could help humans consider the moral consequences of shaping environments on Earth.

The Mars rover scenario represents a stark illustration of a debate that has raged in the environmental community for decades — whether to keep environments completely free of the contamination from human influence or whether to take the pragmatic approach of regulating how humans change their environments.

Over the past year, David Grinspoon, the first NASA/ Library of Congress Astrobiology chair, has tried to connect the dots between astrobiology's study of life in the universe and how humans deal with environmental issues on Earth. He discussed his idea with other scholars during a panel discussion at the John W. Kluge Center in the Library of Congress in Washington, D.C. on Feb. 28. [5 Bold Claims of Alien Life]

"There is a history of thinking about space science from an environmental ethics perspective," Grinspoon said. "And part of what I want to do is turn that back and use that experience to see if it reflects how we think about the Earth."

NASA has already put decades of thought into the ethics of disturbing pristine environments untouched by humans, Grinspoon pointed out. The U.S. space agency's Office of Planetary Protection looks carefully at each mission's risk of contaminating other worlds with Earth organisms, as well as the possible reverse risk of contaminating Earth with extraterrestrial material.

Yet Grinspoon said he favors a pragmatic approach in dealing with how humans interact with Earth's environments. The planet has never truly been an untouched Garden of Eden during the period of human existence known by the proposed term "Anthropocene" — the geological era when human activities have increasingly defined the physical environments on Earth through agriculture and industry. Such human influence has also extended beyond mass landscaping to climate change.

"There's eco-pragmatism where you recognize, 'Yeah, we live on a planet that's permanently altered by humanity, and rather than seek to return to or preserve pure wilderness, we recognize that's an illusion and we proceed under the new knowledge that we live, in fact, in a human-dominated planet,'" Grinspoon explained.

Environmental awareness has strong roots in the famous "Earthrise" picture taken by Apollo 8 astronauts on the moon in 1968, which helped people appreciate the fragility of life on our planet, said Jean-Francois Mouhot, a historian who specializes in environmental history and the history of slavery.

"This picture of the Earth from space had a major impact on the environmental consciousness especially in the western world, and a lot of people became attracted to the environmental movement," Mouhot said. "And especially by seeing this small planet as, you know, spaceship Earth, a fragile planet that it's alone in the universe, it could die one day.  It has a limited amount of resources."

The scholars talked in particular about the challenges posed by climate change on Earth — a process that includes a warming trend fueled in part by rising concentrations of carbon dioxide and other emissions. Many human activities, notably usage of fossil fuels to power modern civilization, have contributed to the rise in carbon dioxide.

Humans were not the first species on Earth to cause a global environmental catastrophe, Grinspoon said. Cyanobacteria caused mass extinctions by learning to harness solar energy through photosynthesis 2.2 billion years ago — a process that led to the buildup of oxygen and wiped out much organic life that was not suited to such an oxygen-rich environment.

Still, Grinspoon said that humans have a responsibility for their actions because they possess the consciousness and intelligence to look into the future and anticipate some consequences.

A technological breakthrough or "game changer" could help humans continue to produce the energy they need without impacting the Earth's environments and climate even more, Grinspoon suggested. He also agreed with Mouhot's preference for a "change in moral landscape" that would promote sustainable living attitudes.

"We have to learn to become a new kind of entity on this world that has the maturity and the awareness to handle being a global species with the power to change our planet and use that power in a way that is conducive to the kind of global society we want to have," Grinspoon said.

Science fiction has often imagined a fantasy of intelligent aliens coming to tell humans how to handle matters on Earth, Grinspoon joked. But without an ET intervention, humans will have to look to literature, history and science to figure out how to keep their advanced civilizations going sustainably far into the future.