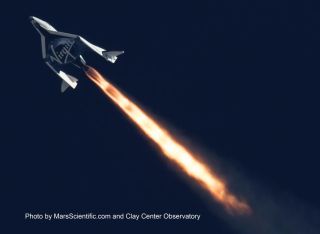 So far, about 650 customers have put down deposits or paid in full for rides aboard SpaceShipTwo, which now cost $250,000.

SpaceShipTwo’s last powered flight was in September when it fired its engine for about 20 seconds. To reach suborbital space, the engine will need to burn for about one minute.

Speaking at a science writers conference in Gainesville, Fla., on Sunday (Nov. 3), Whitesides said the company is on track to begin its commercial space flight services next year. The first passengers include company founder Richard Branson and family.