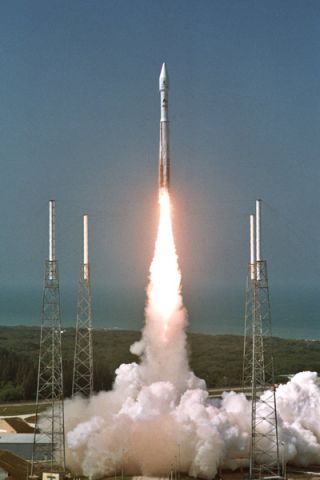 ALockheed Martin Atlas 5 rocket kept its appointment to launch a televisionbroadcast satellite that will serve million of homes across Europe,successfully roaring off a Florida launch pad Thursday on the exact minutescheduled months in advance.

A flawless countdown underbeaming blue skies saw the 19-story rocket fueled with supercold fuel andreadied for its mission to deliver the ASTRA 1KR spacecraft into orbit.

The Atlas program hadamassed an enviable record of perfect launches dating back to 1993. A goodflight Thursday would increase that tally to 79.

And Luxembourg-basedsatellite operator SES ASTRA is relying on the satellite to become a criticalreplacement in its space network, which provides more than 1,600 television andradio channels to 107 million households using a fleet of spacecraft.

At 4:27 p.m. EDT (2027GMT), clocks reached zero and the main engine fired to full throttle. Momentslater, a lone solid-fuel kick motor attached to the rocket's side was ignitedfor liftoff from Cape Canaveral's Complex 41.

Never before had an Atlasflown with such an unusual configuration. Rockets normally fly with either nostrap-on boosters or else multiple ones. But the Atlas 5 vehicle was designedfrom its inception with the philosophy of each launch being tailored to thepayload. If a cargo's weight needs the power of only one booster, then that'show the rocket will be built.

Thesolid booster's exhaust nozzle being aligned with the Atlas 5's center ofgravity, coupled with steering control provided by the Russian-made RD-180 mainengine, made Thursday's strange-looking ascent go smoothly. And officials noteflying another solid motor to "even out" the appearance would makethe rocket a bit more expensive and add worry about another part that mustoperate properly and then jettison to be successful.

While this was the firstone-solid mission, two of the seven previous Atlas 5 launches flew successfullywith uneven numbers of boosters attached to the first stage, including thecommercial Inmarsat mission a year ago with two boosters strapped to therocket's south side and one on the north; and January's New Horizons launch toPluto with two on the south and three motors on the north.

The ASTRA 1KR mission wasbooked last year to launch on April 20 aboard an Atlas 5-411 rocket version,which translates to a four-meter nose cone covering the satellite, one solidrocket booster and a single-engine Centaur. And it was the first time an Atlasrocket had been picked to launch an ASTRA craft.

As the rocket sailed awayThursday, the solid booster completed its job and separated. The first stagefired for four minutes and then jettisoned, too. That left the Centaur tocomplete a pair of burns to inject the 9,548-pound satellite into a highlyelliptical geosynchronous transfer orbit. That orbit's perigee, or low point,was much higher than usual to help save some of ASTRA 1KR's fuel supply,thereby increasing its life span by about two years.

ASTRA 1KR was released fromthe rocket over the Indian Ocean an hour and 48 minutes after liftoff, givingAtlas its 79th success in a row and sparking celebration back at CapeCanaveral.

"We are very proud andsatisfied that the ASTRA 1KR mission has been a success," said FerdinandKayser, president and CEO of SES ASTRA. "The success of the ASTRA 1KRmission is a milestone in our company history and shows that we havestrengthened the fruitful cooperation with our launch partners, Lockheed Martinand International Launch Services."

ILS markets the Atlas andRussian Proton rocket families, and Thursday's mission was the firm's 100thlaunch since forming in mid-1995. Ninety-seven of the launches have beensuccesses; the three failures were Proton flights.

The Lockheed Martin-builtASTRA 1KR satellite will use an onboard engine over the next week tocircularize its transfer orbit. Once in geostationary orbit, the solar arrayand antenna appendages will be deployed and then a week spent testing onboardsystems. Handover of the satellite to operator SES ASTRA is expected around May5, allowing controllers in Betzdorf, Luxembourg to perform an extensivecheckout of the communications payload and positioning of the craft at itsfinal orbital slot over the equator at 19.2 degrees East longitude.

Officialsanticipate the satellite will enter commercial service on June 18, beginning alife of at least 15 years. It will replace the aging ASTRA 1B and ASTRA 1Cspacecraft launched in 1991 and 1993, respectively.

ASTRA 1KR was built usingthe A2100AX model design. It is equipped with 32 Ku-band transponders totransmit the programming directly to small receiving dishes on homes across Europe. Each of its transponders can relay 10 to 12 television channels.

Lockheed Martin ispreparing for two more Atlas 5 launches this year, both for the U.S. military. An October 12 liftoff from Cape Canaveral will haul a batch of small spacecraft,including an experimental project to test in-space refueling of satellites.That rocket will be the 401 configuration with no solid-fuel motors. The year'smanifest is slated to wrap up November 15 with the first West Coast flight forAtlas 5 from the refurbished Space Launch Complex 3-East at Vandenberg AirForce Base. A classified payload for the National Reconnaissance Office willride aboard a 411-version rocket configured just like the one launched Thursday.