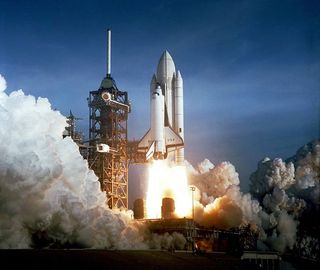 CAPE CANAVERAL - No onereally expected the first space shuttle to fly on April 12, 25 years ago.

It was only the secondcountdown for Columbia. A computer glitch scrubbed the first attempt two daysearlier. After struggling through the ship's creation, workers and astronautsalike were sure several more counts were in the works.

Then it got down to thelast minute.

Crippen turned to Young."I think we might do it!"

When the engines and solidrocket boosters lit, Gene Beckett could see the shock wave rolling across thegrass toward where he stood outside the Vehicle Assembly Building at KennedySpace Center.

"It physically movesyour skin, your clothes and everything else, when you get that initial thunderwhen those SRBs light," said Beckett, now director of United SpaceAlliance's Florida Program Office.

"The marathon that ittook to get us to that point . . . it was just lost in the euphoria thatovercame us," said Sieck, who lives in Viera. "We actually pulled itoff, and it worked."

Crippen became an astronautin 1969. He saw the end of the Apollo moon program in 1972 and thought he wouldfly a lot sooner than 1981.

"The space shuttlemain engines were having problems," he said. "We had a lot of blowupon the test stand, and of course that's something you don't want to happen, sowe were busy working those. And also, our infamous tiles, the shuttle heatprotection system, would not adhere to the vehicle very good."

Since the foam that coatedthe external fuel tank was expected to pop off, engineers wanted to understandhow dangerous it would be to the tiles. So Sieck provided a testing tool -- hisrace car. With an array of tiles on the rollbar, he would drive at 100 mph ormore under a structure on the shuttle landing strip, running the tiles intoslabs of foam until they broke.

Apollo veteran Beckett, wholives on Merritt Island, was charged with keeping track of the ship's partsafter it arrived at KSC from Boeing's plant in Palmdale, Calif. "Withoutcomputers, we'd have never been able to do it," he said.

This was no"gumdrop" capsule like Apollo had been. "All of a sudden, we hadtires, we had wheels, and we had wings, and we had elevons and control surfacesand payload bay doors."

The new systems neededdocumentation. Gary Henderson of Melbourne, now with United Space Alliance'sprocurement office, was hired to write instruction manuals. "I have noidea what they're talking about," he told his wife after the first day."They all speak in acronyms. I'm never going to learn this."

He stuck with it,deciphered the technology and listened to the doubts of the steely-eyed missilemen who had sent astronauts to the moon.

"I can remember theApollo guys sitting next to me and saying, 'This isn't going to work.' Theywere ready to go back to a single stick at that point."

Crippen and Young trainedendlessly, for any problem they thought they could do something about.

"People at Kennedy hadreally done great work on the vehicle," Young said at Kennedy Space CenterVisitor Complex on Friday. ". . . We spent lots of weeks down here wherewe were in the vehicle learning every switch and circuit breaker and what itdid and operating it, and so it was a lot of fun."

"All of our previousspace launch vehicles had been flown unmanned before we put people on them, sothis was a test pilot's dream to get to fly this flight," Crippen said.

Crippen, a Navy pilot,compares the launch to a catapult shot off an aircraft carrier. The ascentwasn't violent, he said, but "any time you go from sitting on the pad togoing to 17,500 mph in eight and a half minutes, it's a pretty excitingride."

On orbit, they saw aproblem.

Nonetheless, the orbiter,which had launched on the 20th anniversary of Yuri Gagarin's historic flight, landedwith aplomb at Edwards Air Force Base in California on April 14. The peopleat KSC were exhilarated, but there was no way they would launch 24 times ayear, as the hype would have it.

"There wasn't aquestion in my mind that somebody didn't understand how complicated thisvehicle was to maintain," Beckett said.

NASA hopes the three-shipfleet will finish building the InternationalSpace Station by the time they retirein 2010.

Even so, the shuttle has alegacy, and it's already taught lessons for the designers and operators ofNASA's next spaceships.

"In hindsight, we'dhave made it simpler," Sieck said. "It's got a lot of good featuresin it and lots of redundancy, but it was designed to be a multipurpose vehiclefor any kind of customer. . . . As a result, we have a very complex vehicle,and it's very heavy, and we don't have the customers for a lot of itscapability today."

Fourteen astronauts and twoships are lost -- Challengerin 1986 and Columbia in2003. NASA still wrestles with the dangers and implications of the lattertragedy. The accident inspired new goals considered worthy of the risk: flyingto the moon and Mars.

"That represents a seachange in American space policy for the first time in more than three decades,so that truly is the legacy of the Columbia crew to me," NASAAdministrator Mike Griffin said.

The decision to build ashuttle, to "retreat back to low-Earth orbit" after flying to themoon, is now regarded as a policy mistake, he said.

Even so, people look backand see a technological wonder that deployed scientific observatories such asthe Hubble Space Telescope. "Italso put up a number of Department of Defense satellites that I believe helpedus win the Cold War," said Crippen, who flew four missions.

The ship enabled thedevelopment of a broad range of capabilities in space, said astronaut KenBowersox, director of flight crew operations. "We've dabbled in a lot ofareas, and we've exposed a very large number of people to spaceflight."

"When we got backdown," Crippen said, "John said it was, I guess, like the world'sgreatest all-electric flying machine, that we'd never built anything like itbefore, and I'm not sure we will afterwards."

Publishedunder license from FLORIDATODAY. Copyright © 2006 FLORIDA TODAY. No portion of this material may bereproduced in any way without the written consent of FLORIDA TODAY.