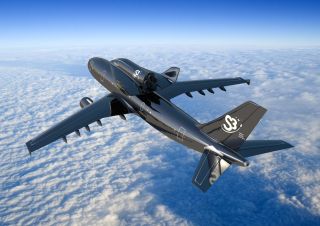 A Switzerland-based spaceflight company is finalizing plans with Canada over a potential launch site for a new private space plane, which is slated to launch a satellite to clean up space junk by 2018.

The company, Swiss Space Systems (S3), plans to launch the new Clean Space One satellite using the European Suborbital Reusable Shuttle, a small space plane the firm is developing for low-cost launches off the back of a modified Airbus A300 jumbo jet.

CleanSpace One is a 66-pound (30 kilograms) technology demonstration spacecraft designed to link up with Switzerland's out-of-commission SwissCube nanosatellite — a small cube that measures 3.93 inches (10 centimeters) on each side — and safely de-orbit the target craft. The mission aims to demonstrate orbital identification and rendezvous with an uncooperative target and has an estimated cost of about 15 million Swiss Francs ($16 million). [See photos of the CleanSpace One space junk cleaning satellite]

SOAR developer S3 is CleanSpace One's primary sponsor, and will pay $5.3 million for assembling and testing the satellite's components and ground-based command operations. The company has also set aside $10.7 million for its own SOAR launch system.

North America and Spain are home to candidate launch sites for the SOAR space plane, so S3 officials have been talking to the U.S. government's Federal Aviation Administration, its Canadian equivalent, Transport Canada and the European Aviation Safety Agency, of which Spain is a member state.

"In 2018, [CleanSpace One] this will be one of our first launches, if not the first one," Grégoire Lorétan, head of S3 communications, told SPACE.com in an email. Lorétan added that S3 would have an announcement about a partnership with Canada in "a few weeks."

S3's SOAR space plane is designed to launch payloads of up to 551 pounds (250 kg) into low-Earth orbit. Because CleanSpace One is being built with commercial off-the-shelf parts, its weight is a low 66 pounds. [SOAR Space Plane Concept: How It Flies (Video)]

CleanSpace One's first satellite target for a de-orbit demonstration will Switzerland's SwissCube nanosat to avoid potential legal issues or other concerns surrounding the de-orbiting of a satellite owned by a party from another country. A satellite that can dock with and deorbit a spacecraft could potentially be used as a sort of anti-satellite weapon.

The United Nations' Committee for the Peaceful Uses of Outer Space told CleanSpace One designer, the École Polytechnique Fédérale de Lausanne (EPFL), it was concerned about other people's debris being de-orbited. The U.N. wanted EPFL to only deorbit its own spacecraft and SwissCube, launched in September 2009, an EPFL craft. [Related: Incredible Technology — How to Clean Up Space Junk]

École Polytechnique Fédérale de Lausanne, located in Lausanne, Switzerland on the edge of Lake Geneva, is one of the country's Federal Institutes of Technology. In a phone interview with SPACE.com on Sept. 11, Volker Gass, the director of EPFL’s space center,  explained why they are developing CleanSpace One. Gass said: "It [SwissCube] came within 75 meters [246 feet] of another debris this morning. This debris topic is very hot. ESA is already working on this for managing debris, and agencies like CNES [the French space agency] and DLR [Germany aerospace agency] are looking into this and funding projects to do demonstrations.”

In addition to the CleanSpace One effort, EPFL has been working with the European Space Agency on new technologies for spacecraft propulsion, navigation, reconnaissance systems and hardware for anchoring a satellite to pieces of space debris. Switzerland's Swiss Universities of Applied Science and the Eidgenössische Technische Hochschule Zürich, in the Swiss city of Zurich, are providing technical know-how and technology. In 2012, EPFL predicted then that CleanSpace One would cost $10.7 million to design, construct and launch and that the first orbital rendezvous would occur by 2017.

According to EPFL, the Swiss Re insurance company said in 2011 that it had found an almost 1-in-10,000 chance that a large satellite traveling in a low-Earth orbit, below 650 miles, will collide with space junk larger than 0.39 inches (1 cm). Meanwhile, in July of this year NASA's Orbital Debris Program Office stated in its quarterly bulletin that, as of Jan. 1 of 2013, there are estimated to be at least 16,500 man-made objects larger than 3.93 inches (10 cm) orbiting the Earth, and thousands more that are between 0.39 and 3.93 inches. [Worst Space Debris Events of All Time]

Gass told SPACE.com that the EPFL envisages a family of spacecraft for the various sizes of debris, yet he added the organization will not enter into the business of providing debris deorbiting services. Lorétan confirmed in his Sept. 12 email that S3 would also not provide a debris deorbit service.

Acknowledging that the CleanSpace One technologies can be used to extend a spacecraft's lifespan, Gass told SPACE.com, "[life extension] it is a very good approach and we are also looking into these elements and this is the whole topic of orbital debris in general, not just the CleanSpace One mission."

Orbital had identified 140 commercial satellites that by 2017 could have been serviced by its 1,000-pound (453 kg) spacecraft. Kosmas' refueling spacecraft, called Hermes, had a customer with Middle Eastern satellite operator Arabsat. Kosmas had priced its refuelling services at up to 10 million euros ($13.2 million) per 110 pounds (50 kg) of propellant.

The U.S. Department of Defense has looked at similar technology. From 2003 to 2008, the military's Defense Advanced Research Project Agency (DARPA) performed studies such as the Spacecraft for the Universal Modification of Orbits (SUMO) and Front-end Robotics Enabling Near-term Demonstration from 2003 to 2008. DARPA's SUMO website stated that, "SUMO can perform station-keeping and attitude control and modify the spacecraft’s orbit," indicating the military’s interest in deorbiting combatant’s uncooperative satellites.

In 2007, DARPA successfully carried out an in-orbit servicing demonstration mission with its Orbital Express vehicle. The agency is currently developing the Phoenix space debris cleanup and salvage satellite, which would use parts from dead satellites to fix other satellites or build new craft in space.

In addition to CleanSpace One project work, S3 announced on Sept. 30 a launch deal to launch 28 satellites for the Swiss microgravity medical experiment specialist Spacepharma, which is based in Delémont city in North West Switzerland. Under the deal, S3's SOAR space plane will launch four of Spacepharma's 11-pound (5 kg) satellites in 2018 and the remaining 24 spacecraft are to be orbited by the suborbital shuttle at a rate of one per month over the following 24 months.

Spacepharma's satellites are based on Cubesat technology and will carry medical experiments onboard. The company hopes to eventually evolve its small spacecraft design into a larger 110-pound (50 kg) version.

S3 already had four launch agreements with one of its partner organizations, Belgium's Von Karman Institute, a fluid dynamics research, prior to the Spacepharma deal.

For more than $10 million, the reusable SOAR space plane will carry commercial satellites from 33,000 feet to an altitude of nearly 50 miles (80 kilometers), but not beyond the accepted boundary of space, which is 62 miles (100 km). The satellites are released from SOAR's cargo bay at an altitude of 50 miles, with the payload's own rocket engine then igniting to kick it up to about 434 miles above the Earth. SOAR’s maiden flight is planned for late 2017.

Lorétan told SPACE.com in his Sept. 12 email that SOAR's Systems Requirements Review, which is a basic design review, would come later this fall, and S3 would "communicate about this milestone soon."

The total development cost for the SOAR launch system is estimated to be about $214 million. Lorétan declined to say who is providing the funds, but confirmed that the funding was in place for this year and "our budget is covered by our partners and private investors."

After releasing its cargo SOAR glides back to its spaceport, which could be in the United States, Canada or Spain or in the other candidate sites of Malaysia and Morocco. S3 expects to be making an announcement soon about the progress of its partner Spaceport Malaysia.

Lorétan expects that manned flight tests will be carried out with the help of ESA's European Astronaut Centre and Franco-Italian company Thales Alenia Space.

Thales, one of S3's partners, provided pressurized vessels for the International Space Station and it has signed a contract with S3 for that technology. The pressure vessel will initially be used to carry experiments and the technology could create a passenger cabin.

In March, S3 told SPACE.com that it planned to announce in April the company providing SOAR’s liquid oxygen and kerosene-fueled rocket engine. In his email, Lorétan said: "We don't communicate this information due to signed [nondisclosure agreements] NDAs. What we can mention is that the engine of the SOAR and the upper stage both come from the same country and we are currently discussing the issues related to the export of these engines."

However, on Sept. 23, S3 announced a partnership with Russia's Bauman Moscow State Technical University (BMSTU) stating that BMTSU students will, "pursue their research work in relations to S3 propulsion systems, one of the key elements for the SOAR shuttle and its expendable upper stage." The university has produced engineers for the Soviet Union and subsequently Russian space programs and Russia is the country with the most experience in liquid oxygen and kerosene rocket engines.