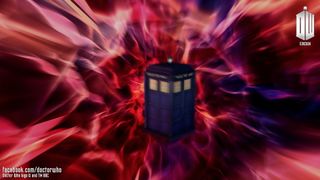 The time-traveling TARDIS from the TV show "Doctor Who" flies through space. The popular series has remained a cultural touchstone for over 50 years.
(Image: © Doctor Who Facebook)

Look out, dark energy: A TARDIS may be the real reason the universe is accelerating.

Regions in space-time that are bigger on the inside than the outside — just like the sci-fi character Doctor Who's TARDIS (Time and Relative Dimension in Space) time machine — could help explain the universe's quickening expansion.

These theoretical bubbles are named "Tardis regions." They're not a perfect explanation of how the expansion occurs, but they are a first step in making a model that is closer to reality, its proponents said. [Gallery: Dark Matter Throughout the Universe]

"The idea was to get this proof of principle, that this is possible that you can do it," Syksy Rasanen, a lecturer in theoretical physics at the University of Helsinki, told SPACE.com. "We're not claiming the inside of the hole is realistic, but it's the first model where we have an exact solution where structures that are distributed randomly in space have a significant effect on the expansion rate."

The universe is not only expanding, but its growth is accelerating. That startling realization occurred in 1998 after two research groups measured cosmic distances using Type Ia supernovas, which all have similar absolute brightnesses. A Type Ia appears fainter the farther away it is from Earth.

Instead of gravity slowing things down as expected, the universe was growing at a faster rate. A popular explanation offered today is a mysterious force called dark energy, which is believed to make up nearly three-quarters of the universe. No one knows what substances are in dark energy, but the leading theory proposes it is a property of space itself.

Dark energy is not the only explanation out there, however. Perhaps gravity does not behave as scientists expect it to. At great distances, maybe gravity speeds up expansion instead of slowing it down, or perhaps the acceleration is due to how certain types of structures form.

"In this model, at early times, the holes expand [at the same rate] as the background, but as the universe becomes older and older, the hole expansion becomes more and more," Rasanen said. "The expansion rate is bigger than what you expect."

Rasanen's team built on a cosmological model first proposed by Albert Einstein and Willem de Sitter. In simple terms, it portrays the universe as mostly homogeneous, but peppered with regions that are different than the background — almost like Swiss cheese.

Most variations of the model have the regions and the background grow at the same rate, but Rasanen's team put in variables to make those inhomogeneities grow independently. (One limitation of the model is the regions do not interact with each other or the background, something the researchers plan to address in the future.)

"With the holes in the Swiss cheese, we have built them so they are specially curved such that they get the expansion rate that we want," Rasanen said. "Though the Tardis regions we used are not realistic, the property that regions can have larger volume than expected based on their surface area is a general feature of gravity."

One demonstration of space-time curvature occurs with gravitational lensing, a phenomenon that happens when a huge mass (such as a group of galaxies) bends the light of stars or galaxies behind the mass from Earth's vantage point.

The research has been submitted to the Journal of Cosmology and Astroparticle Physics and was detailed online on the preprint website Arxiv.