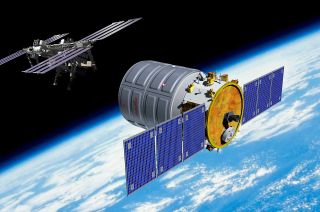 The unmanned Cygnus spacecraft, built by Virginia-based company Orbital Sciences, is expected to be grabbed by the orbiting lab's huge robotic arm at 7:15 a.m. EDT (1115 GMT) on Sunday, with docking operations beginning two hours later. You can watch all the action live here at SPACE.com, courtesy of NASA TV; coverage begins at 4:30 a.m. EDT.

Cygnus blasted off atop Orbital's Antares rocket on Sept. 18, kicking off a critical demonstration mission designed to show that the company is ready to begin a series of supply runs to the space station for NASA. Orbital holds a $1.9 billion deal with the space agency to make eight such flights. [How the Cygnus Spacecraft Works (Infographic)]

The cargo vessel was originally slated to rendezvous with the International Space Station on Sept. 22, but a software glitch scuttled that plan. The delivery of three new crewmembers to the orbiting lab by a Russian Soyuz spacecraft on Wednesday (Sept. 25) also complicated matters for Cygnus, pushing its arrival back further.

Sunday's docking will be a big moment for NASA, Cygnus and Orbital Sciences, but it won't mark the first time a private spaceship has visited the orbiting lab. SpaceX's robotic Dragon capsule has docked with the station three times — first on a demonstration mission in May 2012, then on contracted cargo runs in October 2012 and March of this year.

California-based SpaceX, which was founded by billionaire entrepreneur Elon Musk, holds a $1.6 billion contract with NASA to make at least 12 such flights.

After docking, Cygnus will zip around the Earth with the space station for about 30 days, at which point it will depart and burn up in Earth's atmosphere over the Pacific Ocean. (SpaceX's Dragon capsules, by contrast, are built to survive re-entry, so they can bring cargo back down to Earth as well.)