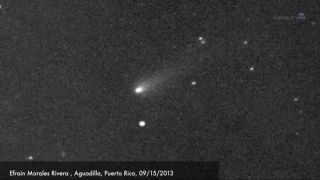 Comet ISON was photographed by Efrain Morales Rivera on Sept. 15, 2013, as seen in this still from a NASA video. Video published Sept. 23, 2013.
(Image: © NASA (via YouTube as ScienceAtNASA))

The potential "comet of the century" Comet ISON could either become a shining visual treat or a fizzled out chunk of rock and ice when it makes its close pass of the sun, but which will it be?

As the comet moves toward its close encounter with the star, amateur astronomers are providing information that could help scientists understand more about Comet ISON's shift into brilliance or mediocrity. You can watch a video about Comet ISON's current brightness here on SPACE.com.

"Comet ISON is approaching Mars in the pre-dawn sky," Carey Lisse, head of NASA's Comet ISON Observing Campaign, said in a statement. "It is invisible to the naked eye, but within reach of backyard telescopes." [Photos of Comet ISON: A Potentially Great Comet]

Many of those telescopes have already turned toward the approaching comet.

"I photographed Comet ISON on September 15 using my 4-inch refractor," U.K. amateur astrophotographer Pete Lawrence was reported as saying in a NASA statement. "The comet's tail is nicely on view even through this relatively small instrument."

In Puerto Rico, astronomer Efrain Morales Rivera used a 12-inch (30 cm) telescope to view the comet "rising above the canopy of the rain forest just minutes before sunrise" on Sept. 14.

Composed of ice and dust, comets are often compared to dusty snowballs as they travel through the solar system. Almost all comets spend the majority of their lives in the Oort Cloud, a icy region beyond the reaches of Pluto.

Occasionally during their lives, they slingshot around the sun, where the heat turns their dust and ice into a gaseous cloud, creating a tail that always streams away from the star.

Discovered in September 2012 by Russian astronomers Vitali Nevski and Artyom Novichonok, ISON will travel within 680,000 miles (1.1 million kilometers) above the sun's surface on Nov. 28. The question on everyone's mind is how it will respond to its close brush with the sun.

Because this is ISON's first visit to the inner solar system, the results of the interaction are still up for grabs. Comets that have shown signs of a promising show have fizzled out in the past.

"ISON appears likely to survive the in-bound leg of its journey all the way to the sun," comet expert John Bortle said.

Cautioning that the comet's change in brightness will likely be slower than previous reports have suggested, he went on to say that "Comet ISON should very briefly become exceptionally bright, at least rivaling the planet Venus in the hours preceding its closest approach to the sun."

At the moment ISON is dimmer than some have anticipated, shining about as brightly as distant Pluto.

"Certainly we would love it to be a couple of magnitudes brighter right now, but it's doing just fine," Karl Battams of the Naval Research Lab said. "I'd say it's still on course to become a very eye-catching object."

Amateur astronomers aren't the only ones studying the approaching comet. As it moves toward the sun, NASA's STEREO satellite and the NASA/ESA Solar and Heliospheric Observatory will have their lenses trained on ISON. Both are equipped with coronagraphs to block the bright light from the sun, capturing ISON at its brightest.

But amateur astronomers can often help fill in the gaps left by larger observatories.

"Observations from amateur astronomers are really valuable pieces of the puzzle for us," Battams said. "They help us to see how the comet is evolving."

Editor's note: If you snap a photo of Comet ISON or any other amazing night-sky object and you'd like to share it for a possible story or image gallery, please send images, comments and details to managing editor Tariq Malik at spacephotos@space.com.