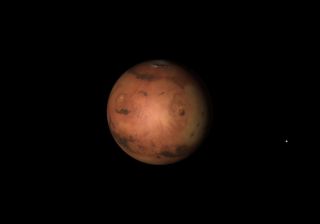 In September 2013, Mars is now a bright object in the morning sky. Mars is in Cancer, passing in front of the Beehive cluster on Sept. 9.
(Image: © Starry Night Software)

Doug Turnbull writes science fiction based on hard science. Most of his books, novellas and short stories confront problems faced by early settlers of other worlds. He contributed this article to SPACE.com's Expert Voices: Op-Ed & Insights.

Saturday, Aug. 31, marked the end of the application period for future astronauts hoping to catch a ride on a rocket to Mars. The project, known as Mars One, is a nonprofit foundation established with the eventual goal of using existing transportation and other technologies to arrive at and settle on Mars.

As a hard-science fiction writer, I have spent some time attempting to envision what life might be like as a settler on Mars 35 years from now. If any of the three or four major, private-sector plans to travel to Mars come to fruition, humanity may well find out if my predictions are right.

On Earth, most modern, urban residents living in the developed world spend the vast majority of their time indoors, and the same would be true for future Mars settlers. But, unlike Earth, Mars lacks a magnetosphere to protect the surface from solar and cosmic radiation. To shield the residents from these high-energy particles, habitats, laboratories and so forth will be located underground. Mars One founder and CEO Bas Lansdorp discusses the nature of the radiation danger in the July SPACE.com article Radiation Fears Shouldn't Hold Back Mars Colonization (Op-Ed).

The underground configuration would also help moderate the extreme variations in temperature between day and night on the martian surface. Because the climate in the equatorial zone is relatively moderate, by martian standards, with temperatures ranging from 20 degrees Celsius (70 degrees Fahrenheit) in the daytime to minus 73 degrees Celsius (minus 100 degrees Fahrenheit) at night, this will likely be the location of a Mars settlement. In one of my novels, I placed the first settlement on the floor of Nicholson Crater, which, being well below the Mars equivalent of "sea level," has an atmosphere that is thicker, and therefore warmer, than average. Energy for the settlement will come primarily from an array of photovoltaic solar panels supplemented by a small nuclear power plant. In "The Man Who Conquered Mars" (Dog Ear Publishing, 2010), I describe the layout of such a settlement, its food and power sources:

The station was laid out in the approximate shape of an X, with four arms radiating from a central hub of structures, each consisting of a long mound about 2 meters wide, 1.5 meters high, and 150 meters long. These arms were the tunnels that connected the habitats to each other and to the central structures. Because the habitats themselves were all buried, they appeared only as raised ridges of martian soil 10 meters wide, 3 meters high, and 25 meters long arranged perpendicular to the arms like the steps on a telephone pole. Ten habitats were located along each arm. Each pair of ridges had a greenhouse located between them. At the point where the arms of the X met were located the larger underground structures of the community room, laboratories, workshops, and garages. The town waterworks and well were located between the two southern arms, and just east of the crossing point was the nuclear power plant. On the east and west sides of town were the solar arrays, each covering several acres.

Water will be essential to establishing a permanent settlement on Mars. Since it exists only in traces in the atmosphere and as ice in the Polar Regions during the long martian winters, the next most likely place to look for it is underground. Since the ambient temperature even in equatorial Mars is minus 27 degrees Celsius (minus 16 degrees Fahrenheit), it probably will exist in the form of permafrost. Such water can be harvested through a process similar to the fracking procedure used for natural gas mining here on Earth. Once underground fractures are created with explosives, warm water can be pumped into them, melting the ice. The mixture, probably briny and impure, would be pumped out, filtered and distilled. With 95 percent recycling, a level similar to that currently achieved on the International Space Station, ample water for a settlement could be made available.

Food shipped from Earth will be prohibitively expensive, so mid-century settlers would have to grow their own, probably using hydroponic farming in pressure-sealed greenhouses. Sunlight on Mars is about 40 percent as intense as that on Earth, but because the martian atmosphere is so thin, it would be more than sufficient to power photosynthesis. The transparent panels of the greenhouses need filters to eliminate harmful levels of ultraviolet and other radiation and could be made opaque in the event of a solar storm as well as at night to retain heat. A settler's diet would probably be largely vegan and meat substitutes would probably be used. Other types of meats might consist of those that synthetically created. The hydroponic farms will have the added benefit of generating oxygen for the settlement while consuming the carbon dioxide generated by the settlers.

Who will be these Mars settlers, these people who are willing to make a one-way trip to a distant planet? Just the sort of people who make up the most qualified volunteers for the Mars One project: scientists to do research and get the grants to do that work; pilots to fly the spacecraft, engineers to discover and create solutions to the inevitable physical problems that will arise; and technicians to improvise and keep the machinery of the settlement running smoothly. Not incidentally, a fair balance of families would be necessary in order to create new Mars settlers in situ.

For a Mars settler, particularly one of a generation born and raised there, donning a pressure suit prior to going outdoors may become as routine as it is for a Laplander to put on a parka, snow pants and boots before going outside in the winter. In "Tenderfoot," I describe a mid-21st century pressure suit:

They were already wearing their inner suits, which were the form fitting garments that protected their skin against the low atmospheric pressure of Mars. Their helmets would each seal against a ring that was located at the top of the inner suit and rested near the collarbone. The outer suit, while also sealed, would not be pressurized so as to remain flexible. It served principally as insulation against heat, cold, and radiation. In addition, it provided a tough skin of protection for the more fragile inner suit.

While this may sound unbelievable, MIT scientists are currently working on — and have largely perfected — a suit similar to what I describe as the "inner suit."

Since working in pressure suits is inefficient and potentially hazardous, the operation of robotic construction and maintenance equipment will feature prominently in the skill sets of Mars settlers. Indeed, such remote-controlled robo-workers may allow the construction of habitats and support machinery prior to arrival by the first Mars settlers in the 2020s. The Mars Science Laboratory (Curiosity) currently exploring Mars, as well as the deep water robots that repaired the oil well blowout in the Gulf of Mexico while beneath nearly 2 kilometers (1 mile) of water, are prototype examples of these kinds of telerobotic machines.

To travel across the surface of the planet, the settlers will use rovers about the size of Curiosity, the SUV-sized, six-wheeled science rover currently traversing Mars. These vehicles will have mechanical arms with hands so that the occupants can perform tasks outside without leaving the cabin. I describe the use of such a vehicle in "The Man Who Conquered Mars":

The rover consisted of a flattened cylinder, two meters high on the inside, three meters wide, with a bunk on either side and a storage area toward the rear, with a rounded Plexiglas window ahead of the controls, which were located in front of two bucket-style seats. Above and below the bunks were mounted the oven, refrigerator, and storage bins. An air lock was positioned at the rear, with more outside storage on either side of the external door as well as along the sides of the vehicle. Eight meters long from bumper to bumper, the rover was supported by six tired wheels, each with its own suspension and steering system driven by an electric motor. Power came from a combination of sixty square meters of solar panels arrayed above the roof like giant wings, storage batteries, and a fuel cell. The fuel for the cell was regenerated using electricity from the solar panels when the cell was not in use.

If a Mars settlement is to be economically sustainable, it must find a way to earn its keep. The mid-century settlement will be much like a university campus. It will be sustained primarily by endowments and grants to do research. Secondary sources of income will be revenue from product endorsements, reality programming, educational programming, interviews and so forth. If some U.N. treaties are reworked to better support commercialization, revenues might also be obtained from the sale of mineral rights, tourist concessions, commercial land developers and real estate grants. There may also be income from new products and inventions that are discovered by researchers because of their unique location on Mars.

Life on Mars at midcentury will not be glamorous, but neither was life in the settlements on North America during the early colonial period. To date, 165,000 people have volunteered to participate in the Mars One project from more than 140 countries, many of whom are scientists and engineers. Take, for example, these five candidates, who describe themselves in their online portfolio:

These highly qualified applicants indicate that, despite a few crackpots who might apply, there are serious folks who feel that being a true pioneer is worth some hardship.

The views expressed are those of the author and do not necessarily reflect the views of the publisher. This article was originally published on SPACE.com.