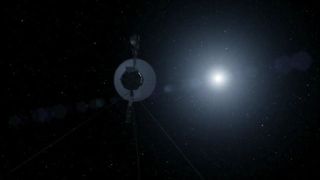 This still from a NASA video shows the Voyager 1 probe nearly 12 billion miles from the sun as it goes boldly into the final frontier of interstellar space as the farthest man-made object in human history.
(Image: © NASA/JPL-Caltech)

Now that NASA's Voyager 1 probe has left the solar system, its next big spaceflight milestone comes with the flyby of another star — in 40,000 years.

Voyager 1 entered interstellar space in August 2012, nearly 35 years after blasting off, scientists announced Thursday (Sept. 12). As it leaves our solar system behind, the robotic spacecraft is streaking toward an encounter with a star called AC +79 3888, which lies 17.6 light-years from Earth.

"Voyager's on its way to a close approach with it in about 40,000 years," Voyager project manager Suzanne Dodd, of NASA's Jet Propulsion Laboratory in Pasadena, Calif., told reporters Thursday. "It's going to come within 1.7 light-years of this star — and it'll swing by it, and it will continue to orbit around the center of our Milky Way galaxy." [Voyager 1 in Interstellar Space: Complete Coverage]

The probe won't beam home any data from AC +79 3888's neighborhood, of course. Voyager 1's declining power supply will force the mission team to turn off its first instrument in 2020, and all of the science gear will stop working by 2025, Dodd said.

That time window still gives Voyager 1 a dozen years or so to study interstellar space up close, and researchers can't wait to see what the probe observes in this unexplored realm.

For example, the spacecraft's data should shed light on how interstellar plasma flows around the heliosphere — the huge bubble of charged particles and magnetic fields that the sun puffs out around itself — said Voyager chief scientist Ed Stone, a physicist at the California Institute of Technology in Pasadena.

"So now, we will be able to understand and measure and observe that interaction, which is a very important part of how the sun interacts with what's around it," Stone told SPACE.com.

Voyager 1 and its twin, Voyager 2, launched a few weeks apart in 1977 to study Jupiter, Saturn, Uranus and Neptune. The duo completed this unprecedented "grand tour" in 1989, and then embarked on a new mission to investigate the outer reaches of the solar system and interstellar space.

Voyager 2 may join its twin in interstellar space three or four years from now, Stone said, stressing that it's tough to predict a departure date in advance.