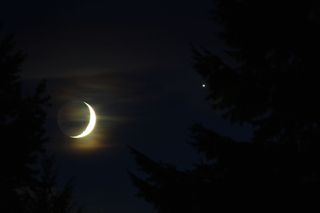 The night sky tonight (Sept. 8) brings stargazers one of the last few good opportunities to glimpse the ringed wonder of our solar system — the planet Saturn — in the evening sky, with the brilliant Venus and a crescent moon joining the celestial show.

Saturn has been a fixture in evening sky since early spring in the Northern Hemisphere. Since then, the planet has shined with a steady and sedate yellow-white glow, making it a fairly prominent sight right through spring and much of the summer.

But now Saturn is approaching a point where the combination of low altitude and its proximity to the increasingly bright twilight glow is making it increasingly hard to see. But tonight, there will be a good opportunity to readily identify it in the evening twilight sky. [Amazing September Night Sky Photos by Stargazers]

How to see Saturn and Venus

Here are some tips to see the double-planet show:

About 45 minutes after sunset tonight, look low toward the west-southwest sky for the waxing crescent moon, which will appear 21-percent illuminated. Once you have found it, look well to the lower right of the moon and you'll see the brilliant planetVenus. Then, located at a higher altitude, you should be able to see a relatively bright "star" (though about 1/100th as bright as Venus) shining through the bright twilight.

That won't be a star, however, but Saturn. It will glow roughly 5 degrees to the right of the moon. Use your clenched fist, held at arm’s length for that measures roughly 10 degrees. So relative to the moon, Saturn will appear a "half-fist" to the right.

Saturn is now 972 million miles (1.56 billion kilometers) from Earth. Because of its relatively low altitude, this is not a good time for a telescope view of this gas giant, but using a magnification of at least 30-power, you can still make out Saturn's famous rings, tilted 18.5 degrees from edgewise.

Just four years ago, the rings were turned edge-on toward us and were virtually impossible to see. Four years from now, they will be tilted at their maximum inclination (27 degrees) toward us.

You can still find Saturn in the night sky after tonight, although without the moon as a guidepost beginners may have a more difficult time identifying it. The dazzling planet Venus, however, will slowly be climbing up toward Saturn in the evenings to come, although the two planets won't appear very close.

On. Sept. 16, a week after Venus' amazing encounter with the moon on Sept. 8, you can see Saturn hovering 4 degrees directly above Venus. Two evenings later, Venus will have slid to Saturn's lower left and drawing about a half-degree closer to it.

This will be as close Venus will get to Saturn, the so-called "lord of the rings." Venus will gradually pull away to the east, and by Sept. 25 it will have moved about 10 degrees ("one fist") to the left of Saturn.

After becoming hopelessly immersed in bright twilight in early October, Saturn will pass through conjunction with the sun on Nov. 6.Once it returns into view from Earth, it will be in the morning sky in late-November, rising just before the sun.

During the latter part of November, you will be able to find Saturn due to its proximity to another very bright planet — Mercury. In fact, the two will have a very close encounter on Nov. 26 in the dawn sky.

Editor's note:If you snap an amazing photo of Saturn, Venus and the moon— or any other night sky sight — and would like to share it with SPACE.com for a possible story or photo gallery, please send images and comments, including name and equipment used, to managing editor Tariq Malik at: spacephotos@space.com.