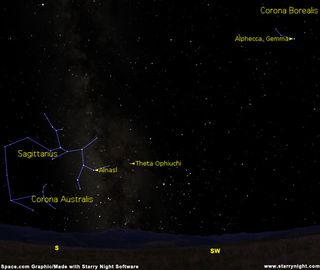 For many years at New York's Hayden Planetarium, I would look forward to the month of September, because I could always have a little fun with my audience by reminding them that the annual Miss America Pageant was close at hand.

Held each year in Atlantic City, N.J., the contest would present its winner with a crown shaped very much like a tiara. I would then point out not one, but two crowns that adorned the late summer evening sky.

But that practice came to a halt in 2006 when the pageant moved from Atlantic City to Las Vegas and the date was shifted from September to January. This year, however, Miss America will return to Atlantic City, and the contest will again be held in September. So, once again, my Miss America-themed star I.D. is relevant. [Amazing Night Sky Photos for August (Gallery)]

A crown of gems, a crown of leaves

There are two crown constellations shining in the sky now: Corona Australis, or the Southern Crown, and Corona Borealis, or the Northern Crown.

Stargazers should look low in the sky near the southern horizon at nightfall to catch the Southern Crown, while the Northern Crown can be spotted high in the west. The brightest star in the Corona Borealis is 2nd magnitude Gemma, sometimes called the "crown jewel." Fittingly, the Northern Crown bears a striking resemblance to Miss America's tiara.

The Southern Crown is a fainter collection of stars, arranged in a tighter pattern. The brightest stars in the Corona Australis are 4th magnitude.

For most of the United States, unfortunately, the Southern Crown is quite close to the horizon, in an area where haze becomes quite significant. From New York, the crown barely gets 10 degrees above the horizon (the equivalent of the width of your fist held at arm’s length). Observers have to go as far south as Florida or the Gulf Coast to get a really good view of the Southern Crown.

Both crowns are ancient constellations, part of Claudius Ptolemy’s "definitive" list of 48 groupings that were handed down to Western peoples from Ptolemy's era.

Corona Borealis is the gem-studded golden crown of Ariadne, who, in Greek legend, received it from Bacchus upon marrying him.

Corona Australis was originally a group that represented a crown of leaves sometimes worn by the ancients on ceremonial occasions. The gem-less Southern Crown has no particular story associated with it, although some write that it was another crown that Bacchus gave as a gift, this one to his mother, Semele.

Also on these late summer evenings after the sun has set, look low in the south for the classical archer, Sagittarius. Traditionally a centaur (half man, half horse), this constellation is one of two such creatures in the sky. The other is Centaurus, a large, complex star pattern best viewed during the spring from far-southern localities.

Long ago, Sagittarius was not a centaur at all, but simply a standing archer looking with some apprehension toward the Scorpion immediately to his west.

About two-fifths of the way up from the star Al Nasl northwest to Theta Ophiuchi lies in the direction of the center of the Milky Way, appearing as a veritable cloud of stars. The English poet John Milton once described the Milky Way as a "broad and ample road whose dust is gold and pavement stars."

In Latin, "Via Lactea" describes the star system’s appearance in the sky. For the same reason, the Greeks used the words "gala" and "kyklos," meaning milk and circle — hence the word galaxy.

Although tracing out an Archer-Centaur among Sagittarius' stars does require some imagination, visualizing the constellation as a teapot is quite easy. In fact, it is the Teapot and not the Archer that is portrayed on most star charts and in observing guides.

I find it a truly delightful pattern: as star pictures go, it's one of the best. Nearly 40 years ago, the late astronomy-popularizer, George Lovi pointed out that stargazers could augment their stellar tea service with a teaspoon and lemon as well. Lovi's "Teaspoon" is made from stars in northern Sagittarius, while his "Lemon" is an alternate rendition of the Southern Crown.

Joe Rao serves as an instructor and guest lecturer at New York's Hayden Planetarium. He writes about astronomy for Natural History magazine, Farmer's Almanac and other publications, and he is also an on-camera meteorologist for News 12 Westchester, N.Y. Follow us @Spacedotcom, Facebook and Google+. Original article on SPACE.com.