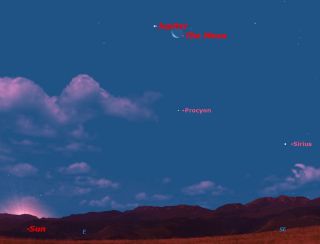 Saturday, August 31, 2013, morning. Jupiter will be just to the left of the waning crescent moon.
(Image: © Starry Night Software)

As we kick off the Labor Day holiday weekend, early on Saturday (Aug. 31) during the predawn hours, check out the east-northeast sky anytime after 2 a.m. local daylight time and your eyes will immediately be drawn to the two brightest objects in the sky at that early hour.

You will see the moon, less than five days before new phase: a slender crescent, just 23 percent illuminated by the sun with the rest of its disk possibly glowing with a faint blue-gray hue. That's Earthshine, a phenomenon caused by sunlight reflected off Earth and then back out into space toward the moon. If you have binoculars or a small low-power telescope, be sure to check out the moon and it will appear as a weirdly illuminated ball suspended in space and very much three-dimensional.

To the left of this lunar ball will be a dazzling, silvery non-twinkling "star." However, this is not a star, but a planet — the biggest in our solar system — Jupiter. This planet shines with nearly double the brightness of Sirius, the brightest star in the night sky. The two will be separated by roughly 5 degrees, or half the width of your clenched fist held at arm's length.  [Best Night Sky Events of August 2013 (Sky Maps)]

"Big Jupe" rises around 1:50 a.m. local daylight time, but its rising time will be getting earlier by an average of 3.3 minutes a day, so that a month from now it will be rising just 10 minutes past the witching hour of midnight.

The giant planet, shining brightly low in the east with its four moons visible in small telescopes, will provide a dramatic end to many a late-night observing session as we get ready to move into the chilly nights of September.

Indeed, if you train a telescope on Jupiter you will see all four of the Galilean moons on one side of the planet. Moving out from Jupiter will be Callisto, Io, Ganymede and Europa. Add our own satellite, and that's five moons in the sky for the price of one!