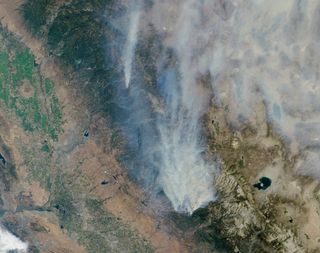 NASA satellites in orbit high above the surface of the Earth are keeping close tabs on the massive wildfire currently raging in California.

The California Rim Fire was previously spotted from space by NASA astronaut Karen Nyberg on the International Space Station, but new images beamed down to Earth from NASA's Aqua and Terra spacecraft are showing the wildfire in a new light.

One image taken by the Terra spacecraft's Multi-angle Imaging SpectroRadiometer instrument (MISR) shows smoke rising from the fire that began on Aug. 17 and has burned through nearly 180,000 acres (72,843 hectares) as of Aug. 27, according to NASA officials.

"On the morning of Aug. 23, Terra passed over the fire, allowing MISR’s nadir (vertical-viewing) camera to capture an image of extensive, brownish smoke," NASA officials wrote in a release. "The imaged area measures 236 by 215 miles (380 by 346 kilometers)."

Another photo, captured on Aug. 26 by Aqua's Atmospheric Infrared Sounder (AIRS) instrument shows a plume of carbon monoxide emanating from the California Rim Fire. The image shows a three-day running average of carbon monoxide at an altitude of 3.4 miles (5.5 km) above the planet, NASA officials wrote in a statement.

"AIRS is most sensitive to carbon monoxide at this altitude, which is a region conducive to long-range transport of the smoke," NASA officials wrote.  "As the carbon monoxide from the fire is lofted into the atmosphere, it becomes caught in the lower bounds of the mid-latitude jet stream, which swiftly transports it around the globe."

As of Aug. 27 the wildfire was 20 percent contained with more than 3,600 personnel battling the blaze. The California Rim Fire is one of 10 major active wildfires burning in California, according to NASA officials. The wildfire has threatened homes, Yosemite National Park, sequoias and the San Francisco water supply.