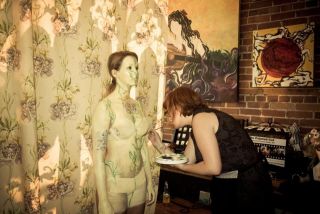 When Canada's rock star astronaut Chris Hadfield visits his birthplace of Sarnia this fall, he'll have a chance to see his dazzling snapshots from space re-imagined on human bodies.

Local Sarnia artist Cat Cabajar has received a $1,000 Canadian (US$962) grant to recreate Hadfield's amazing space images as body art on human models. When complete, the skin of each model will blend in with poster-sized versions of the space photos captured by Hadfield during his five month mission to the International Space Station this year. The astronaut returned to Earth in May. [See astronaut Chris Hadfield's stunning photos of Earth]

The body art space project will be on display at Sarnia's DeGroot's Nursuries in mid-November and Chris Hadfield plans to visit the town on Nov. 23 to sign autographs as a part of a national tour to discuss his upcoming book "An Astronaut's Guide To Life On Earth," which debuts in October.

"Space is just something that always excited me," said Cabajar, who was delighted to see her hometown astronaut sharing the pictures on social media this year and getting worldwide attention for his work.

"He made it an interactive experience from space, and I was impacted by that," Cabajar told SPACE.com. "He inspired people from all different walks of life."

From children's parties to professional photography

Cabajar has been creating body art for nine years, and cites Australian artist Emma Hack as one of her chief influences. Cabajar started doing part-time work for children's birthday parties and similar projects, but the demand became so great that she opened a studio two years ago.

Her studio, The Painted Cat, is also based in Sarnia. It's a location for all sorts of temporary art, including henna, children's face painting and professional body art for photo shoots. A typical body art painting takes about four hours to finish, Cabajar said.

Funding for Cabajar's latest project came from the Awesome Foundation, which is an informal network of chapter groups that, based on a concept that originated in Boston, individually provide $1,000 grants to local projects. The trustees required that Cabajar receive permission from the Hadfield family, which she obtained, before going ahead.

"Then I heard he was going to be in town for a book signing," Cabajar said, who received permission from the hosts to be there. The event will be held at DeGroot's Nurseries and hosted by local bookstore The Book Keeper.

Cabajar's next step is to pick pictures out of the thousands that Hadfield snapped from the International Space Station. Cabajar narrowed the selection to 30 images and is asking her followers on Instagram, Facebook and other social media to give feedback. She also hopes to run the selections by Hadfield himself.

Hadfield will be on hand for about an hour during the Nov. 23 event to sign copies of "An Astronaut's Guide To Life On Earth." Cabajar's event will last throughout the afternoon.

Cabajar expects to showcase four to six images of her work on poster-sized, 24-by-36 inch prints. Smaller pictures will be available for sale. A time lapse of her at work will play on video, and Cabajar will also be at the event painting a model in front of a picture Hadfield took.

"It's the biggest show I've done in my career so far, and I'm excited to see it come together," Cabajar said. There is another thing she is eager to experience, too: "I can hardly wait to meet Chris Hadfield."

Other collaborators in the project include Ryan Farr from Proper Photography, videographers Brian White and Ian Alexander, and musician Bryn Gillings.

Hadfield leapt to international fame shortly after launching into space in December 2012. He first hit the public eye after having Twitter conversations with Star Trek actors from space, but gained a greater following as he shared his experiences on the International Space Station through Twitter, Facebook, YouTube and other forms of social media.

As commander of Expedition 35, Hadfield played guitar in space, wrote music and also ran a productive mission in terms of science performed, despite his crew needing to perform an unplanned spacewalk near the spaceflight's end to deal with an ammonia leak in the space station's cooling system.