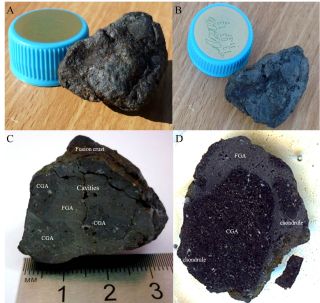 Fragment of Chelyabinsk meteorite, showing the fusion crust -- the result of a previous collision or near miss with another planetary body or with the sun.
(Image: © Victor Sharygin)

The meteor that exploded over Chelyabinsk, Russia, in February likely had a near miss before it hit Earth, possibly with another solar system object or a too-close graze by the sun, scientists have found.

The bus-size space rock was largely vaporized by the heat of impact with Earth's atmosphere, but many fragments survived to crash into the ground as meteorites when it hit on Feb. 15. The impact shattered windows, damaged property and injured more than 1,000 people in the city, which lies 950 miles (1,500 km) east of Moscow.

Analysis of the meteorites that crashed into Russia's Chebarkul Lake has found interesting geologic signatures in the rock fragments. Some meteorites show evidence of melting, caused by intense heating, before they ever reached Earth's atmosphere. [See photos of the Feb. 15 Russian fireball]

This kind of melting could have been caused by an earlier impact with another asteroid in the solar system, scientists say, or it might have happened if the Chelyabinsk meteor traveled to close to the sun and got burned.

"The meteorite which landed near Chelyabinsk is a type known as an LL5 chondrite and it's fairly common for these to have undergone a melting process before they fall to Earth," geologist Victor Sharygin of the Institute of Geology and Mineralogy in Novosibirsk, Russia, said in a statement. "This almost certainly means that there was a collision between the Chelyabinsk meteorite and another body in the solar system or a near miss with the sun."

Sharygin and his colleagues will present their findings Tuesday (Aug. 27) at the Goldschmidt conference in Florence.

The evidence for melting is found in a subset of the meteorites collected from the Chelyabinsk incident that have been classified as "dark" fragments. These dark rocks are rarer than the more common light and intermediate fragments found from the meteor, but some present clear signs of melting in their structure, texture and mineral composition, researchers said.

This melting can't have been caused by the meteor's passage through Earth's atmosphere, even though that certainly caused melting to the surface of the rock as well, because the evidence for earlier melting is distinct from the 'fusion crust' on the meteorites' surfaces. All meteorites have a fusion crust, where a thin layer of material at the rock's surface is melted by the heat of Earth entry, and then re-solidifies when it cools.

Another surprise finding from the Chelyabinsk meteorites came from their fusion crusts. There, researchers found small amounts of platinum-group elements, in the form of an alloy of osmium, iridium and platinum, that are rare in this layer of meteorites. The scientists think these may have formed when the falling rocks slam into Earth's atmosphere.

"Platinum group elements usually occur as trace elements dispersed in meteorite minerals, but we found them as a nanometer-sized mineral (100-200 nm) in a metal-sulfide globule in the fusion crust of the Chelyabinsk meteorite," Sharygin said. "We think the appearance (formation) of this platinum group mineral in the fusion crust may be linked to compositional changes in metal-sulfide liquid during remelting and oxidation processes as the meteorite came into contact with atmospheric oxygen."