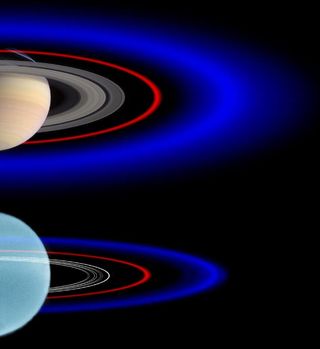 A schematic view of the outer rings of Saturn (top) and Uranus (bottom).
(Image: © Science)

Saturn is the only other planet with an identified blue outer ring in the solar system. Both blue rings are associated with small moons; Saturn with Enceladus and Uranus with Mab.

"The outer ring of Saturn is blue and has Enceladus right smack at its brightest spot, and Uranus is strikingly similar, with its blue ring right on top of Mab's orbit," said Imke de Pater, professor of astronomy at the University of California, Berkeley.

All other rings, such as the those around Jupiter, Saturn, Uranus, and Neptune, sport a reddish color because they are composed of larger particles that reflect red light. The particles themselves may also be reddish, possibly from iron.

The color of Saturn's blue ring has been credited to the tiny particles spewed into space by Enceladus as it orbits around the planet. But the same probably isn't true for Uranus, scientists say.

Uranus' newly discovered moon, Mab, is a small, dead, rocky ball only about 15 miles across-one-twentieth the diameter of Enceladus.

The scientists however suspect that both of these rings are subject to forces acting on dust in the rings, which allow the tiny particles to survive while the larger ones are captured by their moons.

These fragments are subject to forces that push them away or toward the planet out of the moon's orbit.  The result is a ring of small particles, each only a fraction of a human hair in width, that reflect and scatter mostly blue light.

"This model can be transferred directly to what we now see in Uranus," de Pater said.  "Although we still need to understand the details of the process."

The study is detailed in the April 7 issue of the journal Science.