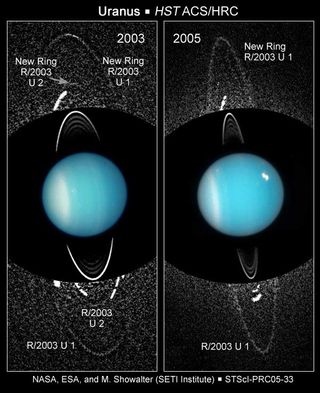 These composite images from several observations by NASA's Hubble Space Telescope reveal a pair of newly discovered rings encircling the planet Uranus. The left composite image is made from Hubble data taken in 2003. The new dusty rings are extremely faint and required long exposures to capture their image. The background speckle pattern is noise in the image.
(Image: © NASA, ESA, and M. Showalter (SETI Institute))

Astronomers have discovered new rings and small moons aroundUranus and found surprising changes in satellite orbits around the giantplanet.

Hubble also spotted two small satellites. One shares itsorbit with one of the newly discovered rings. Most surprisingly, the orbits ofUranus's family of inner moons have changed significantly in the last decade,the new data reveal.

"The new discoveries dramatically demonstrate thatUranus has a youthful and dynamic system of rings and moons," says MarkShowalter of the SETI Institute. "Until now nobody had a clue the ringswere there, we had no right to expect them."

Since dust in such an orbit is expected to be depleted byspiraling away, the rings must be continually replenished with fresh material.Showalter and collaborator Jack Lissauer of the NASA Ames Research Centerpropose that the outermost ring is replenished by a 12-mile-wide companionsatellite, named Mab, which they first saw in 2003 using Hubble. Meteoroidimpacts continually blast dust off the surface of Mab, and the dust thenspreads out into a ring around Uranus.

Other small moons are linked to rings, including Amalthea atJupiter, Pan at Saturn, and Galatea at Neptune.

Mab's ring receives a fresh infusion of dust from eachimpact. In this way, nature "balances the books" by keeping the ringsupplied with new dust while older dust spirals away or bangs back into themoon, the thinking goes.

Showalter and Lissauer have measured numerous changes to theorbits of Uranus's inner moons since 1994.

"This appears to be a random or chaotic process, where thereis a continual exchange of energy and angular momentum between the moons,"Lissauer said. "The changes in the last ten years are small, but the thingabout chaos is that small changes build up exponentially with time. As aresult, this suggests that the entire system is orbitally unstable."

The moons may begin to collide in a few million years,Lissauer figures.

Perhaps the most unstable moon of all is tiny Cupid, whoseorbit brings it within 500 miles of the moon Belinda.

Showalter and Lissauer propose that their discovery of asecond ring, which orbits closer to the planet than the new outermost ring,provides further evidence for collisional evolution of the system. This ringorbits in the midst of the moons but has no visible body to re-supply it withdust.

"This ring may be the telltale sign of an unseen beltof bodies a few feet to a few miles in size," Showalter said. He proposesthat the collisional disruption of a moon in Uranus's past could have producedthe debris ring they now observe.