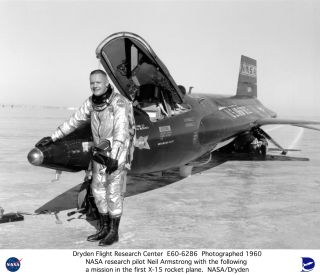 James Hansen, a history professor at Auburn University and the trusted biographer of Neil Armstrong in "First Man: The Life of Neil A. Armstrong" (Simon & Schuster 2005) contributed this article to SPACE.com's Expert Voices: Op-Ed & Insights.

One year has passed since the death of Neil Armstrong on Aug. 25, 2012, and people are still struggling to explain the remarkably unique character of the extraordinarily private man who was the First Man on the Moon. A ghostly TV image in a clumsy spacesuit climbing down a ladder a quarter of a million miles away and becoming the first of our species to set foot on another heavenly body was virtually the sum total of who we knew as Neil Armstrong at the time of his historic Apollo 11 mission.

That iconic astronaut frozen in time, July 20, 1969, remained the sole identity of Armstrong for most people right up to his death 43 years later. Fortunately, thanks to Neil's agreeing back in 2002 to my authoring of what he came to consider his definitive biography, I enjoyed the rare privilege of getting to know Neil Armstrong for who he truly was: a down-to-earth, yet deeply complex and brilliant, three-dimensional human being.

Why Armstrong chose me, a university history professor, to write his life story is a question I never dared ask him; yet it's been one of the most asked questions of me ever since "First Man: The Life of Neil A. Armstrong" came out in 2005. As to Neil's reasoning for deciding to participate actively in my project by giving me access to his papers, allowing me some 55 hours for tape-recorded interviews, and sending me more than 600 informative emails, I can only speculate: I came into his life at the right time.

We were both Midwesterners, with ways of speaking and manners of socially interacting that were very familiar to one another. We were also both offspring of mothers and fathers whose families had made their livings by farming. Also, it seemed to me crucially important to Neil that I wasn't out to sensationalize his career or personal life and that I appreciated what engineers do (and how they do it) and the technical side of his lifelong — not just his spaceflight — achievements. It certainly didn't hurt that he believed he could trust me. The biggest compliment he gave me after the book came out was that I wrote exactly the type of book that I told him I would write. [Neil Armstrong: A Space Icon Remembered (Photos)]

Getting to know Neil, I never forgot the heroic aspects of who he was and what he had achieved — how could I? But Neil was such a good and honorable person that the icon quickly retreated to the back of my mind, and I appreciated him, and the remarkable life he led, for so many other very good reasons, most of them related to his basic humanity.

All his life, in whatever he did, Neil personified the essential qualities and core values of a superlative human being. Don't just ask his fellow astronauts; ask his naval aviator crewmates in Fighter Squadron 51, where as a young man barely 20 years old, he not only flew 78 combat missions over North Korea, but showed extraordinary levels of commitment, dedication, dependability, a thirst for knowledge, self-confidence, toughness, decisiveness, honesty, innovation, loyalty, positive attitude, self-respect, respect for others, integrity, self-reliance, prudence, judiciousness and much more.

One story that Neil told me that he never told anyone else concerned a flight he took over North Korea while on a dawn combat patrol in 1951. Passing over a ridge of low mountains in his F9F Panther jet, Neil saw laid out before him rows and rows of North Korean soldiers, unarmed, doing their daily calisthenics outside their field barracks. He could have mowed them down with machine-gun fire, but he chose to take his finger off the trigger and fly on. As Neil told me, "It looked like they were having a rough enough time doing their morning exercises."

No one else in his fighter squadron that I interviewed ever heard the story, because Neil never told it, but they accepted it without hesitation as true. They themselves would have all fired their guns, they admitted, but there was something too honorable in Neil for him to kill men who were in no position to defend themselves. Neil was quite adamant that he didn't want the story in his biography, and I tell it now, after his death, with some reluctance.

As for the first moon landing 18 years later, no human being could have handled the bright glare of international fame or the instant transformation into a historic and cultural icon better than Neil. It was in Neil's mild and modest personality to avoid publicity and keep to the real business of the engineering and piloting profession he had chosen; he was simply not the sort of man ever to seek what he felt was undeserved profit from his name or reputation.

Neil had been a foremost member of the team that achieved humankind's first forays into deep space — and he always emphasized the teamwork of the 400,000 Americans instrumental to Apollo's success. He had been at the top of that pyramid, but there had been nothing foreordained in his becoming the commander of the first moon landing or becoming the first man out onto the lunar surface. As he always explained, that was mostly the luck of the draw, a series of contingent circumstances. Still, he had done what he had done, and he understood what great sacrifice, what awesome commitment, and what extraordinary human creativity it had taken to get it done. He was immensely proud of the role he had played in the first moon landing, but he would not allow it to turn into a circus performance for him or a money-making machine. [See Neil Armstrong's first footsteps on the moon (Video)]

In major respects, Neil chose to leave that particular stage of his life to the history books. It was like the golfer Bobby Jones never playing competitive golf after winning the Grand Slam or Johnny Carson never again appearing on TV after leaving "The Tonight Show." Not that Neil lived the life of a recluse after Apollo 11 — that is a myth created by journalists frustrated with not getting interviews with him. After the moon, Neil lived a very active life with many more accomplishments to his credit — in teaching, in research, in business and industry, in exploration. And he lived it all with honor and integrity, just as the one with "The Real Right Stuff" should.

In the extraordinarily modest, unassuming and private way he lived his life after Apollo 11, it was clear that Neil understood that this glorious feat that he helped achieve for the country back in the summer of 1969 — glorious for the entire planet — would inexorably be diminished by the blatant commercialism, redundant questions and noise of the modern world. The nobility of his character just would not let him take part in any of that. He was a man who could not be bought, at any price.

He was never about himself, as the following personal anecdote shows. After word came out in 2002 that I was writing Armstrong's biography, actor/director Clint Eastwood hosted Neil and his wife Carol and me and my wife Peggy for a night's stay at his private golf club, Tehama, up in the hills above Carmel Bay in California; Clint was interested in making a Warner Brothers movie based on the book. The next morning, Eastwood invited Neil and I to play a round of golf with him. As I headed to the golf carts, I saw Neil taking his bag of clubs off of Clint's cart and putting my bag in its place. "What are you doing, Neil?" I said. "I figure Clint will have a lot more to talk to you about with the movie than he does with me," was Neil's reply. "I am sure that is not what Clint has in mind," I explained. "You need to be riding with Clint." Truth was, Neil could have cared less if a movie was ever made about his life. He knew that I cared and that's the only reason he had agreed to visit Eastwood. Not surprisingly, the two men didn't hit it off too well: Neil didn't like the violence in Clint's movies, and Clint apparently appreciated space cowboys more than he did real engineer-astronauts. (Eastwood gave up the film rights to Universal Studios, who last year also gave them up. Telling Neil's life story is just too nuanced for Hollywood, apparently.)

Neil was also a man always true to his word. After "First Man" was published in 2005, the institution at which I taught, Auburn University in Alabama, tried very hard to persuade Neil to give our commencement address. Neil said he couldn't. A few years back, he had turned down an invitation from the Sisters of Mercy to give a graduation address at one of their schools in Ohio, telling them he was no longer giving commencement addresses. He couldn't betray the good sisters by speaking at Auburn.

He was a very modest man, but in his modesty, he could be tremendously witty or insightful. Once at a pro-am golf tournament, a lady came up to Neil on the putting green and declared to him, "Aren't you somebody that I should know?" The First Man's ingenious and self-effacing answer was, "Probably not."

For the opening epigram to "First Man," I selected what I felt was a profound sentence from the book, "On the Art of Living," written by American mythologist Joseph Campbell. The sentence read: "The privilege of a lifetime is being who you are."

Neil enjoyed that privilege, and all of us should be delighted that it happened just that way for him — and for us.

The views expressed are those of the author and do not necessarily reflect the views of the publisher. This article was originally published on SPACE.com.