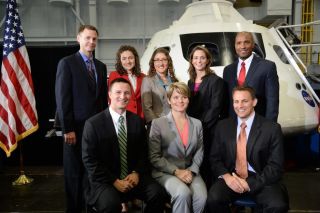 NASA's newest members of the 2013 astronaut class were introduced to the media at a ceremony at the Johnson Space Center, Houston, TX, on August 20, 2013
(Image: © NASA (via Twitter as @AstroClass2013))

The eight newly selected astronauts joining NASA's spaceflying corps revealed some of the details of their grueling application process Tuesday (Aug. 20) in their only news conference before embarking on a rigorous two-year training program.

The lucky eight were selected out of a pool of more than 6,000 applicants, and endured a demanding series of interviews and examinations over the course of a year and a half to make it where they are today.

"Like all government jobs, you apply on the USAjobs website, and it's really a basic CV from the beginning," said new astronaut candidate Jessica U. Meir, who explained that the base requirements to apply were a bachelor's degree in a hard science and three additional years of experience.

From these preliminary applications, NASA selected the top 120 candidates for in-person interviews.

"Once we brought those 120 folks in, they did some initial physical evaluations, they did some anthropometric evaluations, and after their initial interviews we down-selected again to 49 candidates, whom we brought back and did even more detailed physical evaluations and some team-building exercises and additional interviews," said former astronaut Janet Kavandi, current director of flight-crew operations at NASA's Johnson Space Center in Houston. "The eight people you see here before you are the ones that made it through all the gantlet of those evaluations and tests and interviews. These are the people that NASA needs today."

"We all took very, very different paths to get here," said Anne C. McClain, another new recruit, who shared her advice for astronaut hopefuls:

"My advice to young people is to find something that you're passionate about, something that you enjoy doing, something that, if you never get to the step of being an astronaut, you're going to look back and be very satisfied," McClain said. "And then, try to get to the top of your field, but in doing so, don't think so much about what you're accomplishing, but how you accomplish it. Be a good team member. Be a good leader. Be a good follower. Be somebody that if you are selected, people around you are proud. Never take advantage of somebody else in order to get ahead."

Hague, like other members of the new class, applied multiple times before finally being accepted to the astronaut corps.

"This has been a lifelong dream of mine," he said. "I submitted my first application a little over 10 years ago, and I am thrilled to be here."