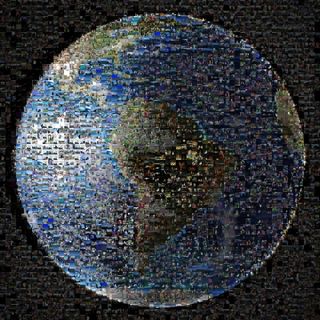 From more than 40 countries and 30 U.S. states, people around the world shared more than 1,400 images of themselves as part of the Wave at Saturn event organized by NASA's Cassini mission. That event on July 19, 2013, marked the day the Cassini spacecraft turned back toward Earth to take our picture as part of a larger mosaic of the Saturn system. Image released Aug. 21, 2013.
(Image: © NASA/JPL-Caltech )

When a NASA spacecraft snapped photos of Earth as it appeared from Saturn in July, the space agency hoped all of humanity would wave back. Now, thanks to an amazing collage, you can see photos taken that day by the space fans around the world that actually waved at the ringed planet.

Scientists working on NASA's Cassini mission to Saturn stitched together more than 1,400 images of people waving at Saturn through Facebook, Instagram, Flickr, Google+, Twitter and email — including photos taken by Cassini itself — to create the giant collage, which resembles the shape Earth. The photos were sent in by people who waved at Saturn from more than 40 countries and 30 states in the United States during the July 19 event.

"Thanks to all of you, near and far, old and young, who joined the Cassini mission in marking the first time inhabitants of Earth had advance notice that our picture was being taken from interplanetary distances," Linda Spilker, Cassini project scientist at NASA's Jet Propulsion Laboratory, Pasadena, Calif., said in a statement unveiling the new image today (Aug. 21). "While Earth is too small in the images Cassini obtained to distinguish any individual human beings, the mission has put together this collage so that we can celebrate all your waving hands, uplifted paws, smiling faces and artwork." [Earth Waves at Saturn: See photos from NASA's Cosmic Photo Bomb By Cassini]

Photos of Saturn taken by skywatchers, pictures of young children and groups of Earthlings waving at the heavens are all prominent features of the image.

More than 20,000 people on Earth waved at Saturn on July 19. A few days later, the Cassini team released a photo of Earth taken by the spacecraft. The photo shows Earth as a small dot from a vantage point of 898 million miles (1.4 billion kilometers) away.

Cassini's photo has been likened to another famous image taken by a spacecraft in a distant part of the solar system. The "Pale Blue Dot" picture, taken in 1990 by NASA's Voyager 1 probe, shows the Earth from a record distance of 3.7 billion miles (6 billion km) away.

Cassini had the chance to turn its sights toward Earth because of a rare total eclipse of the sun from Saturn. Because a of that cosmic coincidence, the spacecraft's sensitive cameras could look Earth-ward without sun-induced damage.

The Cassini probe launched in 1997, arriving at Saturn in July 2004. It is scheduled to study the ringed wonder and its moons until 2017, when it will be crashed into the planet's atmosphere, ending its mission.

A downloadable high-resolution version of the collage is available through NASA. The detailed image allows the viewer to explore each of the individual photos that create the composition as a whole. You can see the ultra high-res image here: http://saturn.jpl.nasa.gov/photos/imagedetails/index.cfm?imageId=4880