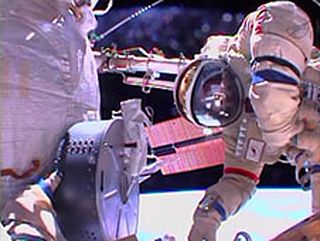 Russian cosmonaut Fyodor Yurchikhin works outside the International Space Station, with the Earth far below, in this still from a NASA broadcast on Aug. 16, 2013.
(Image: © NASA TV)

Two cosmonauts set a new record for the longest Russian spacewalk on Friday (Aug. 16), spending more than seven hours working outside the International Space Station to prepare it for the addition of a new Russian-built orbital lab.

Veteran cosmonaut Fyodor Yurchikhin and flight engineer Alexander Misurkin spent a total of seven hours and 29 minutes — a new Russian record — on a spacewalk to install power and data cables for a new Russian laboratory module expected to launch to the space station in upcoming months. NASA cameras beamed images of the record-setting spacewalk to Earth during the orbital excursion.

NASA spokesman Rob Navias said the cosmonauts broke a Russian spacewalking record that had stood for 23 years. Before Friday, the longest spacewalk by two Russian cosmonauts was seven hours and 16 minutes. It occurred on July, 17 1990 and was performed by cosmonauts Anatoly Solovyev and Alekandr Balandin to repair thermal protection gear on Russia's Mir Space Station. [Most Extreme Human Spaceflight Records of All Time]

"Today, that mark eclipsed by Yurchikhin and Misurkin," Navias said.

Friday's spacewalk was originally supposed to last 6.5 hours, but Russian flight controllers opted to extend it to allow time to retract a hand-operated extendable crane, called Strela, back into place. The cosmonauts initially planned to leave the crane extended for another spacewalk set for Aug. 22.

Yurchikhin and Misurkin spent most of their time Friday installing two long power cables and a data cable on an Earth-facing Pirs docking compartment, which faces the Earth and will ultimately replaced with the new, and larger, Nauka Multipurpose Laboratory. Nauka means "Science" in Russian.

The cable installation was hard on the cosmonauts' hands, since they had to tackle the stiff cables with bulky spacesuit-clad gloves.

But the work appeared to go smoothly, with Yurchikhin and Misurkin also installing a materials science experiment on the station's exterior and a guide line that can be used by future spacewalkers. At one point, one of the cosmonauts was heard humming to himself as they wrapped up their work.

Friday's spacewalk was the fourth of five spacewalks planned for the Expedition 36 crew on the International Space Station, and the first of two spacewalks scheduled in August. Yurchikhin and Misurkin will venture outside the station on Aug. 22 to install equipment for new science experiments.

The Russian spacewalk was the first excursion by space station crewmembers since NASA aborted a spacewalk in U.S.-built spacesuits on July 16. That spacewalk, which included Expedition 36 crewmembers Chris Cassidy of NASA and Italian astronaut Luca Parmitano, was cut short when Parmitano reported a water leak inside his spacesuit that flooded his helmet with a substantial amount of water. An investigation into the cause of the leak is underway.

While the seven-hour, 29-minute spacewalk was the longest Russian spacewalk, it is not the longest spacewalk Yurchikhin has ever performed. In 2007, the cosmonaut spent seven hours and 41 minutes working outside the space station while wearing a U.S. spacesuit during a 2007 spacewalk with NASA astronaut Clayton Anderson to toss a huge, empty ammonia tank into space.

The longest spacewalk in history lasted eight hours and 56 minutes and was performed by NASA astronauts Jim Voss and Susan Helms on March 11, 2001 as they worked on the space station.