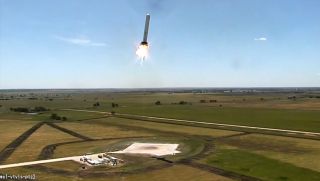 An experimental reusable rocket built by the private spaceflight company SpaceX has soared though a series of ever-higher test flights over its Texas launch site, but it may have just taken its most awesome leap yet: a sideways rocket hop.

The new video shows SpaceX's Grasshopper launching to an altitude of 820 feet (250 meters). The rocket then went into a hover mode, moved 328 feet (100 m) sideways, and then returned back to the center of its launch pad. From launch to landing, the flight lasted just over one minute.

The Grasshopper rocket, which is officially known as the Falcon 9 test rig at SpaceX, stands roughly 10 stories tall and its large size presents a challenge of control for sideways maneuvers. SpaceX officials said in a statement that the test proved "the vehicle's ability to perform more aggressive steering maneuvers than have been attempted in previous flights."

"Diverts like this are an important part of the trajectory in order to land the rocket precisely back at the launch site after re-entering from space at hypersonic velocity," SpaceX officials added.

SpaceX's Grasshopper rocket is a prototype for a new launch system built around completely reusable rocket vehicles. The project aims to make spaceflight cheaper and more efficient than current systems that use expendable rockets that burn up in Earth's atmosphere after lifting their payloads into space, SpaceX CEO and founder Elon Musk has said.

The Grasshopper rocket incorporates the first-stage tank of SpaceX's Falcon 9 rocket, which is used to launch the company's robotic Dragon capsule on contracted cargo runs to the International Space Station for NASA. The Hawthorne, Calif.-based SpaceX holds a $1.6 billion NASA contract to make 12 unmanned deliveries to the orbiting outpost. It has flown two of those 12 flights so far.

Wednesday's test flight is the latest in a series of ever-more ambitious tests for the Grasshopper rocket system. In mid-June, the SpaceX's Grasshopper made its highest flight so far, reaching an altitude of 1,066 feet (325 m) before returning to its launch pad.