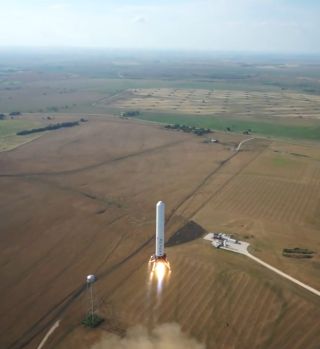 This screenshot from a SpaceX video shows the company's prototype resuable rocket, dubbed "Grasshopper," rising into the Texas skies on June 14, 2013. Grasshopper reached a maximum altitude of 1,066 feet before returning safely to its launch pad.
(Image: © SpaceX)

A private company's prototype reusable rocket made its highest leap to date last month, soaring 100 stories into the air before landing softly back at its launch pad as planned.

In its sixth-ever test flight, SpaceX's experimental Grasshopper rocket hopped to a maximum altitude of 1,066 feet (325 meters) on June 14. It then made a slow and controlled descent back to Earth at the company's rocket development facility in McGregor, Texas.

SpaceX released a 95-second video of Grasshopper's latest amazing flight on Friday (July 5), showing the action from above as seen by a small robotic "hexacopter" drone.

Most rockets are designed to be expendable, burning up in Earth's atmosphere after delivering their payloads to space. SpaceX wants to develop fully reusable launch vehicles, which experts say would make spaceflight much cheaper and more efficient.

The 10-story-tall Grasshopper is a big step in this direction, company officials say. The rocket takes off and lands vertically, touching down on four metallic legs back at its launch pad.

Grasshopper incorporates the first-stage tank of SpaceX's Falcon 9 rocket, which launches the California-based firm's Dragon capsule on unmanned cargo missions to the International Space Station for NASA. But Grasshopper uses just one Merlin engine while the Falcon 9 sports nine (as its name suggests).

"For the first time in this test, Grasshopper made use of its full navigation sensor suite with the F9-R closed loop control flight algorithms to accomplish a precision landing," SpaceX officials wrote in a description accompanying the flight video. "Most rockets are equipped with sensors to determine position, but these sensors are generally not accurate enough to accomplish the type of precision landing necessary with Grasshopper."