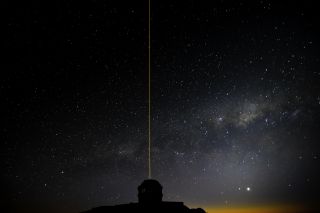 When the Perseid meteors streak across the sky this weekend, they will leave a trail of celestial pollution in their wake, sprinkling a layer of gases high up in the atmosphere.

This pollution doesn't pose a threat to Earth. If anything, it's a gift to scientists: Astronomers will fire powerful lasers into the gassy Perseid meteor shower debris, creating artificial stars that help researchers snap clearer photos of the cosmos.

"One of the gases left behind by meteors is sodium, which collects in a layer about 60 miles (90 kilometers) above the Earth," Chad Trujillo, head of the Gemini Observatory's adaptive optics program, said in a statement. [See early Perseid Meteor Shower photos by stargazers]

"The reason astronomers are so fond of this particular pollution layer is because we can make it glow by using a sodium laser to excite this sodium and produce temporary, artificial stars wherever we like," Trujillo added. "Believe it or not, there aren't enough stars in the sky for astronomers!"

Through adaptive optics systems, scientists can cancel out the hazy interference of Earth's atmosphere during telescope observations from the ground; this allows them to see the universe with remarkable clarity. Artificial stars, also called laser guide stars, can help astronomers correct these adaptive optics systems. They analyze light from guide stars to create a baseline to determine the blurring effects of the atmosphere.

"Perhaps one person's celestial 'pollution' is another's 'natural resource,'" Maria Womack, an astronomy program officer at the U.S. National Science Foundation, said in a statement. "It's this sodium layer, provided courtesy of meteors like the Perseids, that astronomers use to get the clearest views and understand the universe better."

"The wider the column of air, the more turbulence in the air will distort the observed light," Trujillo said. "Using laser guide stars gives us a reference so we can correct for that turbulence and see things with amazing clarity from the ground."

The Perseid meteor display occurs every year in mid-August when the Earth passes through dust from the Comet Swift-Tuttle. This dust burns up in Earth's atmosphere, creating the streaks of meteors visible to observers on the ground. The Perseids will peak overnight between Aug. 11 and 12, and Aug. 12 and 13. To find out how to see the Perseid meteor shower, click here.