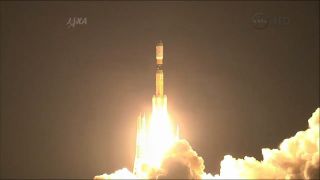 Skywatchers are in for a treat this week, as they can watch a recently launched cargo ship chase the International Space Station through the heavens.

Japan's unmanned HTV-4 cargo vessel blasted off on Saturday (Aug. 3) and is slated to dock with the orbiting lab this Friday (Aug. 9). All this week, stargazers — even those who live in brightly lit cities — should be able to see both spacecraft flying across the night sky.

The appearance of either the International Space Station (ISS) or a craft such as HTV-4 moving through the sky is not in itself unusual. On any clear evening within a couple of hours of local sunset, and with no optical aid, you can usually spot several Earth-orbiting satellites creeping across the sky like moving stars. (Satellites become visible only when they are in sunlight and the observer is in deep twilight or darkness. This usually means shortly after dusk or before dawn.) [See photos of Japan's nighttime HTV-4 space launch]

What makes this week’s passages so interesting is that you’ll be able to see HTV-4 gradually chase down the ISS around Earth, ultimately catching up with the orbiting lab and finally docking with it on Friday at 7:29 a.m. EDT (1129 GMT).

Traveling in their respective orbits at nearly 18,000 mph (29,000 km/h), both the ISS and HTV-4 should be visible for about one to four minutes per pass as they glide through the sky. Across southern Canada and much of the United States as well Europe, the ISS and HTV-4 will be making a number of evening passes after sunset this week.

How to see them

So what is the viewing schedule for your particular hometown? You can easily find out by visiting NASA’s Spot the Station site, or Chris Peat's Heavens Above.

Each will ask for your city and respond with a list of suggested spotting times. Predictions computed a few days ahead of time are usually accurate within a few minutes. However, they can change due to the slow decay of the space station's orbit and periodic reboosts to higher altitudes. Check frequently for updates.

Another interesting website, N2YO.com, tracks more than 8,000 satellites in real time. Check out the sidebar for additional data. Among other things, this information includes the satellite's speed, elevation, and altitude. The sidebar also provides a forecast (with a corresponding map) of the satellite's movement in the next five days.

Fourth flight of the HTV

HTV-4 is the fourth H-2 Transfer Vehicle that Japan has launched toward the International Space Station. Each HTV spacecraft — which measures about 33 feet long by 14.4 feet wide (10 by 4.4 meters) — is built for one-time use, destined to burn up in Earth's atmosphere after completing its delivery duty.

HTV-4 is carrying about 3.5 tons of food, supplies and experiment hardware to the station, as well as a 13-inch-tall (34 centimeters) talking robot named Kirobo.

The HTV line of spacecraft is also known as "Kounotori," which means "White Stork" in Japanese. The robotic cargo ships can carry 6 tons of payload up to the space station.

Editor's note: If you snap an amazing picture of the space station and the cargo ship — or any other night-sky view that you'd like to share for a possible story or image gallery — send photos, comments and your name and location to Managing Editor Tariq Malik at spacephotos@space.com.