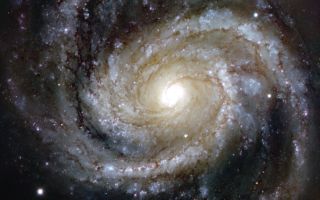 This beautiful space wallpaper shows spiral galaxy Messier 100, located in the southern part of the constellation of Coma Berenices, and lying about 55 million light-years from Earth.
(Image: © ESO)

This beautiful space wallpaper shows spiral galaxy Messier 100, located in the southern part of the constellation of Coma Berenices, and lying about 55 million light-years from Earth. This image shows the main features expected in a galaxy of this type: huge clouds of hydrogen gas, glowing in red patches when they re-emit the energy absorbed from newly born, massive stars; the uniform brightness of older, yellowish stars near the center; and black shreds of dust weaving through the arms of the galaxy. Messier 100 is one of the brightest members of the Virgo Cluster, which is the closest cluster of galaxies to our galaxy, the Milky Way, containing more than 2000 galaxies, including spirals, ellipticals, and irregulars. This image was released July 29, 2013.