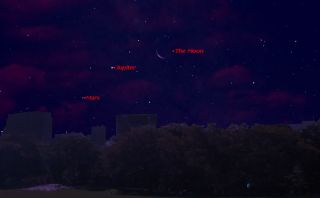 This sky map shows the locations of Jupiter, Mars and the moon just before dawn on Aug. 3, 2013 as seen from mid-northern latitudes.
(Image: © Starry Night Software)

Over the next three mornings, set your alarm clock for about 75 minutes before local sunrise. If your skies are clear, you'll be able to see a "planetary triple play" low in the east-northeast sky.

Three bright planets in the August night sky will be stretched out in a diagonal line in the weekend pre-dawn sky. Going from upper right to lower left will be Jupiter, Mars and Mercury. And as a bonus, visiting each planet during these three mornings will be a waning sliver of a crescent moon.

To see the planets, plan to rise early at about 4:45 a.m. local daylight time. You can see a gallery of August stargazing events here to plan your skywatching activities this month. But for this weekend, here is a viewer’s timetable for early risers:

Aug. 3: Jupiter rises around 3:15 a.m. local daylight time.  It is the most brilliant "star" before dawn. If you are outside during morning twilight, look toward the east-northeast to spot this last starry light that fades out before the coming of day. Jupiter lingers a few degrees to the right of the 3rd-magnitude star Mebsuta of the constellation Gemini, the Twins. Also this morning, situated about 7 degrees to Jupiter's right and slightly higher will be a slender waning crescent moon, 11 percent illuminated by the sun. Astronomers measure the brightness of objects in the night sky in magnitude, a scale in which brighter objects have lower numbers, with negative numbers denoting extremely bright objects.

Aug. 4: Mars is a yellow-orange dot of light, shining at a very modest magnitude of +1.6 (it would be categorized as second magnitude; just 1/25th as bright as Jupiter) and rises about two hours and 20 minutes before sunrise. In the following weeks, Mars will climb a little higher and as a consequence becomes easier to see, so too do the "Twin Stars" of Gemini, Pollux and Castor, situated to the left of Mars. And on this morning, about 5 degrees below and to the right of Mars will be a somewhat thinner (6-percent illuminated) waning crescent moon. As a reference, your closed fist held outstretched at arm's length covers about 10 degrees of the night sky.

Aug. 5: Look for Mercury very low in the east-northeast about an hour before sunrise. This small, fleet world gets lower each dawn in early August, but it also rapidly brightens, from magnitude -0.6 this morning to -1.3 (a trifle fainter than the brightest star, Sirius) by Aug. 13. On this morning, an exceedingly thin crescent moon – just 2 percent illuminated and about 36 hours from new – will lie about a half dozen degrees below and to the right of Mercury.

Keep in mind as you watch this changing celestial scene that each object is situated at a different distance from Earth. The nearest object of course, is the moon, near its apogee – the farthest point in its orbit from Earth – about 252,000 miles (405,000 kilometers).

Editor's Note: If you have an amazing picture of Jupiter, Mars, Mercury or any other night sky view that you'd like to share for a possible story or image gallery, send photos, comments and your name and location to managing editor Tariq Malik at spacephotos@space.com.