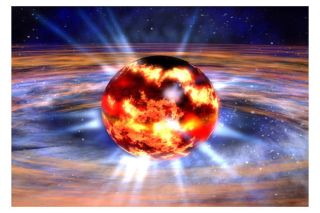 Neutron stars are created when giant stars die in supernovas and their cores collapse, with the protons and electrons essentially melting into each other to form neutrons.
(Image: © NASA/Dana Berry)

Scientists have uncovered a new key to understanding the strange workings of neutron stars — objects so dense they pack the mass of multiple suns into a space smaller than a city.

It turns out there is a universal relationship linking a trio of properties related to how fast the star spins and how easily its shape deforms. This relationship could help astronomers understand the physics inside neutron stars' cores, and distinguish these stars from their even weirder cousins, quark stars.

Neutron stars are born when massive stars run out of fuel for nuclear fusion and collapse. They expel their outer layers, and their cores fall inward under the pull of gravity to become denser and denser. Eventually, the pressure is so great that even atoms cannot retain their structure, and they collapse. Protons and electrons essentially melt into each other, producing neutrons as well as lightweight particles called neutrinos. The end result is a star whose mass is 90percent neutrons. [Graphic: Inside a Neutron Star]

Quark stars are bizarre theorized objects that are even denser than neutron stars, where even neutrons can't survive and they melt down into their constituent quarks.

Part of the problem is that scientists can't definitively tell the difference between neutron stars and quark stars from current observations, so some of the known neutron stars might actually be quark stars. However, the new relationship found by Yagi and Yunes could help distinguish the two super-dense bodies.

The researchers discovered that for all neutron stars there is a relationship between three quantities: a star'smoment of inertia, which defines how quickly it can spin, and its Love number and quadrupolemoment, which reflect how easily the star's shape deforms. The newfound relationship means that if one of these quantities can be measured, the others can be deduced.

Though scientists previously understood that these properties were connected, they didn't realize that such a standard relationship held true. It turns out to be similar to a relationship known for black holes, which are even denser than neutron and quark stars.

"For black holes there is a well-known definite relation, but that made sense because black holes don't have internal structure," Yunes told SPACE.com. "We all expected that that wouldn't be true once you have objects that do have structure."

Understanding this relationship for neutron stars could also help scientists study general relativity and the laws of physics in a strong gravitational field.

"Since a neutron star is very compact, it offers us a nice test-bed to probe gravitational theory in the strong-field regime," Yagi told SPACE.com via email. Previously, uncertainties about the internal structure of neutron starsprevented researchers from carrying out such tests, he added.