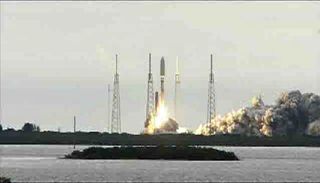 The United States Navy successfully launched a huge communications satellite today (July 19), adding the second piece to a constellation that should provide a big boost to American troops.

The 7.5-ton MUOS-2 — the heaviest payload ever lofted by an Atlas 5 — will help relay communications to forces on the ground from its perch 22,236 miles (35,785 kilometers) above the equator.

The MUOS network will eventually field a total of five spacecraft, with four core satellites and one orbiting spare.

MUOS-1 launched in February 2012. MUOS-3 is tentatively slated to lift off next summer, with MUOS-4 likely following about 12 months after that.

Lockheed Martin won a $2.1 billion contract from the Navy to build MUOS-1, MUOS-2 and associated ground control architecture back in September 2004. The Navy later exercised an option to build three more MUOS spacecraft.