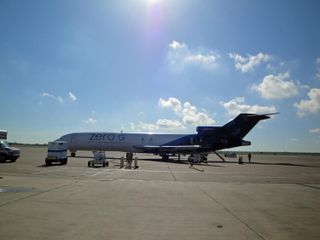 HOUSTON —Mother Nature, we need your help. After one day of delay due to bad weather, a college team of engineering students is hoping for better luck today (July 19) in order to fly on an acrobatic airplane ride and experiment with fire in zero gravity.

The eight-student team from the University of California, San Diego is one of seven university teams set to fly a variety of experiments on a Zero Gravity Corporation jet from Ellington Field here today as part of NASA's Microgravity University Program, which provides students with access to weightless conditions for their experiments. The UCSD Microgravity Team is led by aerospace engineering senior Sam Avery and SPACE.com has been following the group's work as its team journalist to provide a glimpse into how student science on weightless flights is performed.

Bad weather prevented the zero-gravity flight on Thursday afternoon. If the weather cooperates with NASA today, the agency will be able to squeeze in two microgravity flights to fly each university experiment twice, though with different team members. The ZERO-G flight is expected to last up to two hours and include about 32 parabolas on a Boeing 727 plane modified for the extremes of parabolic flight. The plane flies up and down to generate brief periods of weightlessness (about 30 seconds) before swinging back up to pull 2Gs (twice the force of Earth's gravity). [Photos: Zero-Gravity Science at NASA's Microgravity University]

Editor's note: You can follow the progress of today's NASA Microgravity University Program flight via the program's Twitter feed @NASA_RGEFPand by following the hashtag #DefyGravity. UCSD Microgravity Team member Nico Montoya has been posting updates about the team's work at @NicoSuave9.

Here are the college teams flying on today's flights:

The following is a list from NASA of the undergraduate teams set to ride on NASA's zero-gravity flights this week with the names of their experiments: