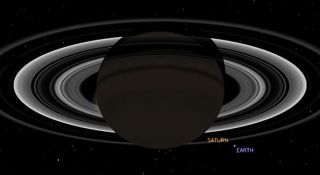 In a cosmic coincidence, two NASA spacecraft in orbit around distant planets in the solar system are expected to take photos of Earth tomorrow (July 19).

On Friday, the Cassini spacecraft orbiting Saturn and the Messenger probe orbiting Mercury will train their cameras on Earth, capturing their unique perspectives on humanity's home in the universe.

Messenger's photos will be taken over the course of two days (July 19 to 20), while Cassini will capture its images during a 15-minute window from 5:27 p.m. to 5:42 p.m. EDT (2127 to 2142 GMT) tomorrow. Cassini mission planners are encouraging Earthlings to "wave at Saturn" during the photo window to take part in the project, even though individual people on Earth will be invisible to the probe's cameras. [See amazing photos taken by Cassini]

"What's important about this particular image is that it's the first time that we've known ahead of time that this picture was going to be taken," Mike Simmons, the founder and president of Astronomers Without Borders said of the Cassini photo. "It's an opportunity to bring awareness of our position in space to everyone, not just show a picture after the fact, but make people aware that there's a spacecraft out there that's doing it, and create an event that people will then want to look up, look at Saturn, learn more about it, and maybe even more importantly be involved in it, be a part of it."

Scientists working with Messenger were inspired by the Cassini team's idea to take a photo of Earth. Coincidentally, they saw that Messenger would have a good view of Earth during planned observations aimed at finding natural satellites around Mercury, NASA officials said.

Cassini and Messenger will each capture different parts of the planet Earth in their images. Messenger will see the Middle East, Central Asia and Europe, while North America and part of the Atlantic Ocean will be in sunlight for Cassini's photo, NASA officials said.

Both photos will take some time to process, but some of the raw images that will be arranged into a cohesive picture from Cassini's photo-snapping session with Earth should be available online as early as July 20.