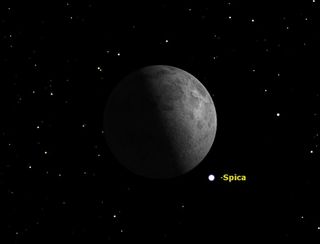 If you only glance at the sky now and then, you may think it's pretty much the same every night. Regular sky watchers know better, and are aware of the constant changes the sky undergoes.

Take the moon, for example. Although most people know that the moon revolves around the Earth, they may never have noticed this movement with their own eyes. This week we get a chance to do exactly that.

The problem is that much of the time the moon is in an open reach of sky, and there are no fixed points to mark its movement. This week it passes close to the bright star Spica and the planet Saturn in the constellation Virgo. [Stunning Night Sky Photos by Stargazers (July 2013)]

On Sunday night (July 14), the moon will be well to the right of Spica (in the northern hemisphere...reverse left and right if you're south of the equator) in the evening sky.

On Monday night (July 15), the moon will be immediately above Spica. In fact, if you live in Central America or Africa, the moon will pass right in front of Spica, in what is called a lunar occultation.

On Tuesday night (July 16), the moon will have moved well to the left of the moon, and will be just below the planet Saturn.

On Wednesday night (July 17), the moon will be well to the left of Saturn.

Let's go back to Monday night, when the moon is closest to Spica. This will not be the only astronomical encounter this night. Stay up until the wee hours of the morning, and you'll see Mars and Jupiter rise an hour before sunrise. If you look at Mars in binoculars or a small telescope, you will see that it is close to one of the brightest star clusters in the sky, Messier 35 in Gemini.

Now we will see how the planets move as well. Because they are farther away, they seem to move much more slowly than the moon.

A few months ago we were watching Mars and Jupiter fade into evening twilight as they moved behind the sun. Now they have emerged into morning twilight to begin their next apparition in our night sky. If you're an early riser, keep an eye on them over the next couple of weeks as they approach each other, pass on the morning of July 22, and then draw apart again.

Editor's note:If you snap an amazing picture of the night sky that you'd like to share for a possible story or image gallery send photos, comments and your name and location to Managing Editor Tariq Malik at spacephotos@space.com.