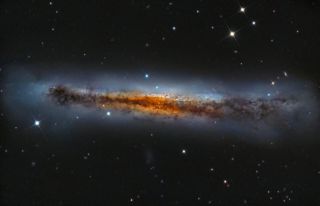 Would you like fries with that? An avid astrophotographer ordered up one mouth-watering image of the Hamburger Galaxy in this latest night sky photo.

Alessandro Falesiedi captured this image on April 14 to 16 just outside of Viterbo, Italy.

The Hamburger Galaxy is viewed edge-on and some say the dark lane of dust and gas in the center appears to be sandwiched between the airy galactic disks similar to a hamburger. Its unique shape may occur because of gravitational interactions with its neighbors. The galaxy, also called NGC 3628, is one member of a group called the Leo triplet located 35 million light-years away in the constellation Leo. [Photos: 65 All-Time Great Galaxy Hits]

Falesiedi took the photo over 10.7 hours. He used a Celestron C11 HD telescope to which direct fire at the focal of 2800 mm was placed with a monochrome CCD Starlight H694, cooled to a temperature of -15 degrees all on a single arm mount Avalon Emme Uno.