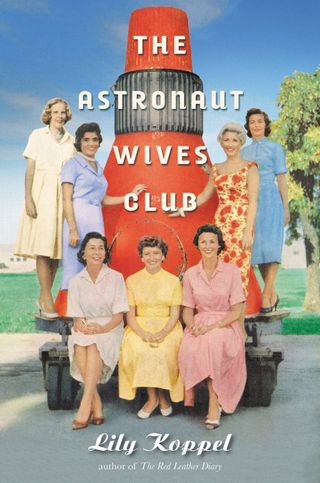 The new book "Astronaut Wives Club" (Grand Central Publishing, June 2013) by Lily Koppel reveals what life was really like for spouses of the Mercury, Gemini and Apollo astronauts.
(Image: © Hachette)

Many of the untold stories of the space race reside with the women. Now, dozens of the wives of Mercury, Gemini and Apollo astronauts have shared their experiences in a new book, "The Astronaut Wives Club" (Grand Central Publishing, June 2013).

SPACE.com caught up with author Lily Koppel to learn what life was like for an astronaut wife during the 1960s and '70s, from stress and sacrifice to glamour and glory.

SPACE.com: Why do you think the stories of astronaut wives were largely ignored as part of the history of space race for so long?

Lily Koppel: They just saw this as part of their duty. They weren't outspoken, they weren't being heroes. We can now have the perspective to look back and say it's not just about the guys in the silver suits, but there's this whole community of engineers, and there was this whole story at home. These wives were basically single mothers during the week who were mowing the lawn, keeping the checkbook balanced, making sure their husbands aren't overly stressed at home, per NASA's recommendations. [Lunar Legacy: 45 Apollo Moon Mission Photos]

Why I was so excited about writing it was because it really was sort of the heart of the endeavor, the emotional story of the space race.

SPACE.com: Do you think people at the time had a really false idea of what these women's lives were like?

Koppel: I think so. When a journalist would ask how they felt, it was like, 'God, if I told you how I really felt, my husband would never get another spaceflight!' So it was just, 'Happy, proud and thrilled.' That was really their motto throughout the program, that's how everything was.

Even the wives say now, looking back at those pictures, 'Don't we look like Stepford wives? But we were so much more than Stepford wives.' They were like supermoms.

SPACE.com: Was it hard for the people you interviewed now to be honest with you about what it was really like?

Koppel: Yeah, I had to coax some of them. They're still very protective of NASA and even if they were divorced from their astronaut, they still had a strong sense of loyalty to him or to the program. I just had to tell them that this wasn't going to be like a National Enquirer piece — it was going to look at their stories with a great deal of dignity, but we really did have to push beyond the vanilla ice cream. But I think that was good and I think they enjoyed being provoked a little.

I think that honestly they feel that they have been shut out of a lot of history. Whenever there are these NASA anniversaries and everyone gathers, a lot of the times it's the astronauts and their second or third or fourth wife. These women are like, 'They didn't live through it — we did.'

And they really went through so much in that decade that they really deserve to be recognized as playing this incredibly important role. It was a huge sacrifice for them. In a way, they gave up a lot of their future, because sometimes it was just impossible, there was no way the marriage was going to survive because they were just living under extraordinary circumstances.

SPACE.com: Why do you think it was so many of these marriages failed?

Koppel: The husbands were like rock stars being followed around by space groupies, the "Cape Cookies," you know. When you go back and look at things and talk to the astronauts, it was very much condoned, the kind of behavior of, 'OK, the Cape is where you're going to be training, you can definitely unwind on the side and questions aren’t necessarily going to be asked. Just make sure it doesn't affect things at home and it doesn't make it into the press.'

So NASA knew these wives were being gung ho and giving their all back at home, and it was basically higher ups like Alan Shepard and Deke Slayton bringing new boys in and giving them a little pep talk. It was very much of the times, very 'Mad Men'-esque. Like, 'Listen, we're hot pilots, do your thing, but make sure it doesn’t make it into the papers.' So I think a lot of the wives were sort of innocent, and they were also in a bit of denial as well.

SPACE.com: Did you get the sense that the wives enjoyed their lives, or was mostly a hardship?

Koppel: No, they definitely enjoyed it.

What I want to convey is they were almost in their own crazy NASA space program — that they had this equally hard role of keeping the home fires burning bright and projecting this perfect American family image to the world, but I think they certainly enjoyed it. It was the most exciting time of their lives.

As Marilyn Lovell [wife of Apollo 13 astronaut Jim Lovell] said to me when I was interviewing her, she started crying and she said, "That was the best time of my life." Or Jane Conrad [wife of Apollo 12 astronaut Pete Conrad] looks back and says "It just feels like a dream."

Because everything was moving so fast and everyone was trying to get to the moon, and the wives were sort of in it as much as their husbands. If he couldn't make it home for two or three weekends in a row because he was training, it was just part of the sacrifice. But then there were incredible things like round-the-world tours after your husband came back, and meeting heads of state, and feeling like you were higher-than-high society and royalty. Your husband had gone where none of these international jet set could even dream of going. [Apollo Astronauts: Then and Now]

SPACE.com: Among the few rare couples that survived, were there any great love stories?

Koppel: Oh yeah. The Lovells are incredible. They've been together since high school. They have such a cute story. They met because Jim Lovell's prom date dumped him, and he asked Marilyn to fill in for him and they’ve been together ever since.

Of course after Apollo 13, Marilyn was terrified. She thought, every time he even went to go to the drug store, that he wasn't going to come home, and she was just absolutely paralyzed by fear. And she finally said, 'I have to see a psychiatrist,' which was really taboo at the time. Even within NASA, they only used outside doctors if they had a problem because they were so scared of not getting a flight. But Marilyn finally told Jim after Apollo 13, 'You're not flying again.'